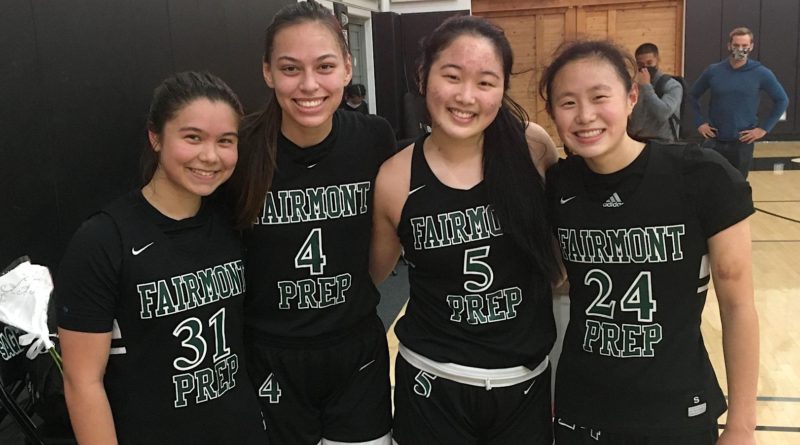 ANAHEIM, CALIF. – Heading into the 2019-2020 school year, the Fairmont Prep girls basketball program was in an unfamiliar position.

After a challenging 2018-2019 season that resulted in a .500 record and a first-round playoff exit, longtime head coach Dave Esparza resigned. In his 16 years at Fairmont Prep, Esparza had led the Huskies to nine league titles and built them into one of the best programs in Orange County.

Now, the Huskies were without a head coach and had just lost a deep and talented senior class to graduation. The future was uncertain.

Hired in September 2019, Brown inherited a roster that looked like it was in rebuilding mode, with no established stars returning. Nobody expected Fairmont Prep to be a factor in the San Joaquin League.

But thanks largely to a talented class of rising juniors, it didn’t take long for the new-look Huskies to raise the bar.

With Brown at the helm and a class of 2021 core of point guard AnLing Su Vera, shooting guard Kayla Ishibashi, forward Mia Yamamoto, and center Makaila Glynn, the 2019-20 Huskies rolled to a 25-8 record that included berths in the CIF Southern Section 2-AA title game and CIF Division 1 state playoffs.

Today, Fairmont (15-6) is sitting on back-to-back San Joaquin League titles, both shared with Orangewood Academy. And after punching its ticket to the Southern Section Division 1 quarterfinals with a win against Chaminade, the Huskies are on track to finish this season with one of its highest statewide rankings in school history. They are among the Top 30 girls basketball teams in California, and that’s unlikely to change given the elite caliber of any opponents they’ll face for the rest of the season.

What has been behind the team’s growth into a state contender?

It starts with a 2021 class that was both filled with unrecognized talent and ready to lead a cultural reinvigoration of the program hand in hand with the new coaching staff.

Per the players, Brown’s positive, encouraging disposition as a coach resonated right away with Fairmont’s up-and-coming core.

“One of the first things coach Brown ever said to me, in our very first meeting, was, we can make it to the CIF championship,” said Su Vera, an Amherst signee.

“Nobody else believed in us. Everyone thought this was just a waste of a year because so many seniors had just left and a whole new coaching staff was coming in. But from that moment on, I knew I could trust her, because she believed in us.”

The players say that the cultural shift started in part with Brown quickly instilling the importance of trusting each other and putting the team over individual interests.

“We don’t do drama,” said Brown, who won three CIF titles as a star player at San Clemente and previously coached at Edison in Huntington Beach. “One player is never bigger than the rest of the team. That’s my biggest philosophy … We win together and lose together.”

“It sounds cliche, but it’s a lot of good vibes,” said Glynn, who will play college ball at William Jessup.

“When you have a coach who listens to you and can mess around and have fun with you when there’s time, it makes me feel more relaxed. That’s the key to a good team – to be relaxed, and obviously play hard, but you have to be comfortable. And she makes us feel like that. It’s a very comfortable atmosphere.”

“When I saw that they bought in and that they trusted me, I said, ‘we’re going to go far,'” said Brown. “I could tell quickly it was a special group.”

“I’m pretty intense, I’m pretty hard on them, but at the same time I’ll pick them up and encourage them.”

“She’s a player’s coach,” said Yamamoto, a Hawaii signee. “She helped make us all more disciplined and gave us more individual attention, and it helped us all a lot.”

Brown is quick to give credit to her now-graduated seniors.

“The number one reason is, they’re unselfish,” said Brown. “The chemistry is amazing on the court, and also off the court. There’s nobody comparing stats. They buy in and they work their tails off. When you’re unselfish and you have chemistry and you have buy-in, with a little talent, there’s no limit.”

“I’ve always wanted to coach kids that want it as bad as me. They’re willing to get back up when it’s hard … And to be a high-level program, you have to have kids like that who don’t have egos.”

The players also see the ability of Brown and the rest of the coaching staff to game-plan at a high level as one of the keys to the team’s success.

“Our coaches do a really good job scouting and making sure we’re prepared. We know the other team’s offense. She’s amazing with that kind of stuff,” said Ishibashi, who will play at Claremont McKenna next year. “So we practice really hard.”

“She will literally stay up all night to make amazing game plans for us,” said Glynn. “She draws up like 30 plays for us … and puts in so much time and effort, I’ve never had a coach like that before. “

For Glynn, the positive atmosphere of the team – and its on-court success – has been a welcomed distraction from several family-related challenges she’s faced, including the murder of her brother in 2018.

“You’re supposed to be able to go to basketball to get away from other stuff … and it’s easier said than done,” said Glynn. “But coach Brown always tells us, ‘whatever is going on in your life, just forget about it for two hours or three hours, and just play.’ She wants us to be comfortable. It makes me feel at ease.”

“That’s why I’m very grateful. It’s a big deal for me to go to college, and live out my life. It’s been a blessing for Fairmont to be here for us and get me where I needed to be.”

While replacing four star seniors and leaders would be a huge challenge for any team, Brown says the impact of such a special class on the program is likely to be long-lasting going forward.

“They’ve brought this program to a level that has raised the bar so high that people want to strive for it,” said Brown. “These kids are excellent in everything they do and they want to be great, and it sets the tone for excellence. It’s easy to coach them because they’re good people. For them to have their coaching staff leave and then not know for an entire summer who was going to come in … it feels like it was meant to be for us to cross paths.”