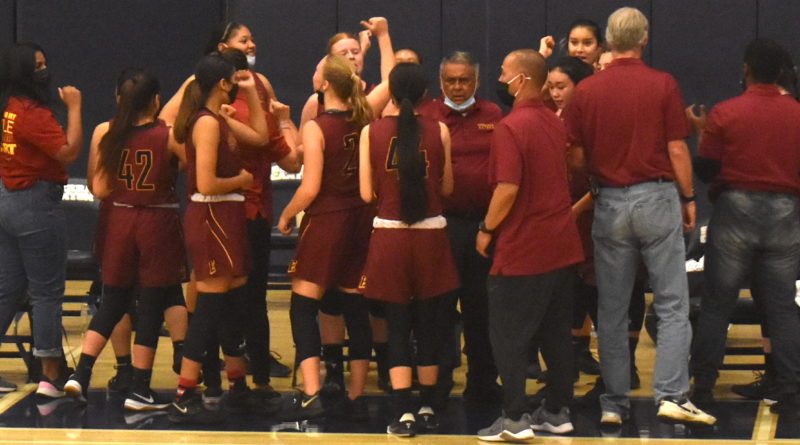 CHATSWORTH– Halftime couldn’t come quick enough for Esperanza on Wednesday. Sierra Canyon had overwhelming momentum and a 17-point lead – its largest of the night. The hosting Trailblazers were up 44-27, and the Aztecs – while not playing poorly – were on the verge of getting blown out.

The Aztecs’ second half comeback to eventually take a one-point lead with a little under seven minutes in the game was nothing short of miraculous. Yet they were in dire straits again with 49.8 seconds left, with Sierra Canyon back up to a 64-60 lead with possession of the ball, and seemingly a sense of having regathered. Still, Esperanza was able to dig deep one more time and pull out an unforgettable 65-64 victory.

Here are four takeaways from the game:

The first half of the game was by far Sierra Canyon’s best offensive half of the playoffs, and it put up 44 points. Mackenly Randolph totaled 17 points and nine rebounds in the first half alone, the ball was moving well, and threes were falling. The Trailblazers were an offensive force to behold, and it only ramped up as the half progressed. Esperanza scored a reasonable 27 points in the first half and was battling on defense, but there was no indication before halftime that the second half would be any better.

ESPERANZA CHANGES IT UP

At halftime, Esperanza head coach Jimmy Valverde told his team, “Give [Sierra Canyon] credit. They were playing phenomenal. We were playing hard, we were doing nothing wrong. Don’t give up, play hard, believe in each other, and that’s exactly what they did.”

Sierra Canyon got into turnover trouble right out the gate in the third quarter, with many coming in both the forced and unforced varieties. The Aztecs went into an unconventional, off-putting diamond-and-one trapping scheme to both slow down Randolph and force turnovers, and they got both desired results. They also threw in some aggressive full-court trapping looks, particularly in the fourth quarter, and the Trailblazers struggled to get into their sets for much of the rest of the game.

With Esperanza down 64-60 without the ball and under a minute to play, Kubo got a steal in the press and immediately drained a top-of-the-key mid-range jumper. Then it was Sierra Canyon ball with 28.3 seconds left, and the Aztecs eventually forced a jump ball and got the possession, leading to a Kubo three off a sideline-out-of-bounds play. The Trailblazers got possession back with 7.9 seconds left and were unable to score.

Kubo led the game with 26 points, and had three assists. Kaiya Mack scored 18 points and dropped three dimes as well. Emily Briggs finished with 14 points and five assists for the Aztecs.

These two teams have a total of three seniors between them. Esperanza is already at minimum a Division 1 semifinalist, and returns all its top players besides Briggs as juniors and seniors next season. Sierra Canyon, on the other hand, is farther away from its maturation date, but has one of the top 2024 classes anywhere in high school basketball featuring Randolph, Reynoso, and Izela Arenas, whose absence was felt by the Trailblazers in this game. Ruelas, a sophomore, has two more seasons after this one as well.

Perhaps next postseason we’ll see these teams run it back – in the Open Division.

In a sense, the Aztecs making it to the semifinals is improbable. Not because they didn’t have the record or talent coming into the playoffs, but in the sense that for two games in a row, they’ve been in some end-game situations where the odds were not with them at all.

Before even making it into this instant classic against the Chatsworth powerhouse, Esperanza found itself down two points with just a couple seconds left and the full length of the court to go last game against Serra (Gardena).

On Wednesday, their odds of coming back from down 17, briefly leading by a point, and coming back yet again from down four without possession and under a minute to play? When you factor in how well the Trailblazers were rolling in the first half, the odds of that happening weren’t a lot better than of Briggs’ half-court heave bottoming the net.

But truly clutch players and teams defy the odds. And Esperanza has been as clutch as it gets.

“They’re the greatest kids I’ve ever coached,” said Valverde. “We’ve got a lot of heart, and we don’t quit.”