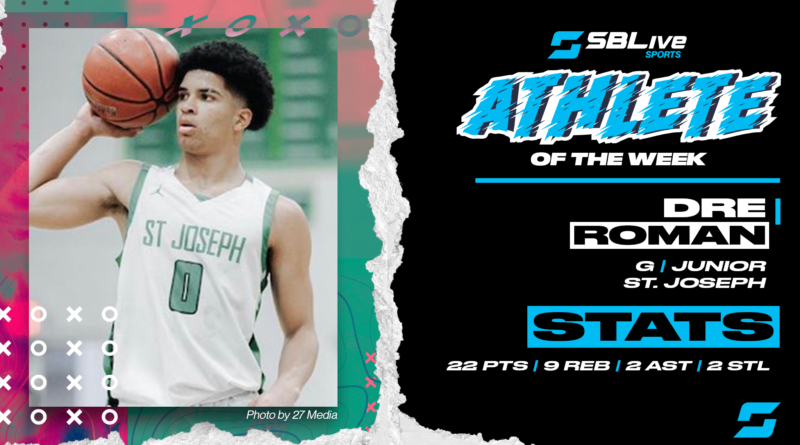 Congratulations to St. Joseph (Santa Maria) junior Dre Roman for being voted SBLive’s Northern California High School Athlete of the Week for May 17-23!

The junior led the Knights to a 2-1 week averaging 22 points, nine rebounds, two assists, and two steals per game on very efficient marks of 62.5% shooting and 72.9% TS.

Ryan Maddox, Clovis North softball: Maddox pitched complete games and got the win in both the Broncos’ games last week, throwing a shutout (seven innings) against Clovis West and nine innings with four runs allowed against Clovis East. To top it off, she went 5-5 in the latter game with a double, a triple, and three runs scored.

Brooke Thompson, Rocklin softball: In 10 innings in the circle across two games last week, Thompson got two wins, allowed only three runs, and struck out 20. She also went 6-9 in three games at bat with a double, a home run, two runs scored, and four RBIs.

Ella Jolley, Sutter softball: Jolley led Sutter to a 2-0 win going a perfect 7-7 with two triples and a double, a walk, four RBIs, and five runs.

Jaylee Ojo, Sheldon softball: In two games, both blowout wins, Ojo went 4-5 with a walk, scored all five times she reached base, hit a double and a homer, and drove in four runs. She also threw a complete game shutout (five innings) with 12 strikeouts in one of the games.

D’Auna Johnson, Sheldon softball: Johnson also went off at bat for the Huskies, going 6-7 with three doubles and six RBIs. She too scored all six times she reached base.