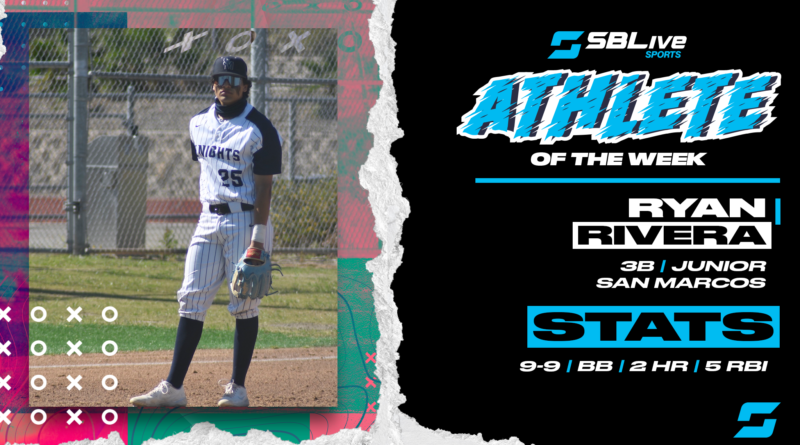 Congratulations to San Marcos junior Ryan Rivera for being voted SBLive’s Southern California High School Athlete of the Week for May 17-23!

The junior went 9-9 with a walk, two home runs, and five runs batted in during two games last week.

AJ Burgin, San Diego G: Burgin posted a triple double with 31 points, 11 rebounds, and 12 assists on senior day in a win over Hoover. He became the all-time leading scorer for the Cavers earlier in the season.

Sofia Maldonado, Santa Clara (Oxnard): A dual-sport athlete, Maldonado scored 15 points in a win against Foothill Tech on Tuesday. She also went 2-3 with the game-winning HR against Grace Brethren on Wednesday. On Saturday, Maldonado had 1 hit and 4 stolen bases in Game 1, as well as going 2-3 with 2 HRs and 5 RBIs in Game 2 against Bishop Diego.

Dylan Jackson, Thousand Oaks C: Jackson homered in each game of the two games against Newbury Park last week giving him eight on the season.

Aubrey Martinez, Palm Desert OF: Martinez has hit at least one double in each of her last five games and now has 17 on the season.

Allyssa DeMayo, Rancho Alamitos OF: DeMayo was 4-6 against Los Amigos with four triples and ten runs batted in.

Ellie Garcia, Don Lugo RHP: Garcia has hit nine home runs over the past seven games and has 14 on the season.

Sophia Ramuno, Helix RHP: Ramuno has had double digit strike out games in each of her last three games, beating Valhalla twice and West Hills once.