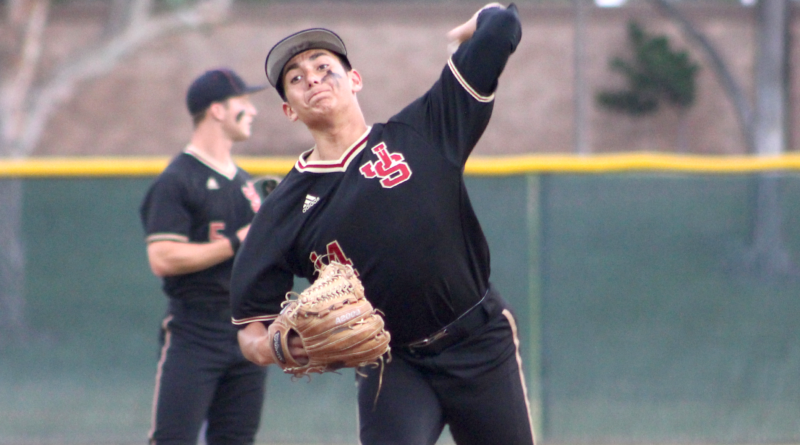 “He’s got a super power when he crosses the white line,” JSerra High School baseball coach Brett Kay said. “He’s calm and quiet off the field and then when you put a ball in his hands he just turns into a Super Hulk baseball guy.”

Even though he stands at 5-foot-11, Jump and the Incredible Hulk have more in common than you might think.

For starters, they both get angry.

“He literally wants to strike everyone out. If he doesn’t strike someone out, he’s pissed,” Lions catcher Colin Blanchard said.

Jump, a left-hander who is expected to be picked in the first two rounds of the 2021 MLB Draft, has put up otherworldly numbers so far this season.

Jump, a UCLA commit, throws four pitches. His four-seam fastball sits in the low to mid 90s and is his best pitch due to his deceptive delivery, which keeps hitters guessing.

There is a long list of Division I arms who can hit 90 miles per hour. What separates Jump from other talented high school pitchers is that his three breaking balls are nearly impossible to identify when they come out of his left hand.

Jump’s knuckle-curve goes from 12 to 6 and is especially deadly after throwing hitters a few fastballs. He also has a cutter that routinely finds the inside corner and a changeup he works in later in games to fool batters who think that after an at bat or two they have Jump figured out.

But no one has figured him out this season. Other teams don’t determine when he gets pulled — Jump leaves games when he hits his predetermined 85 pitch limit, a number put in place to avoid overwork and injury as he prepares for the next steps in his baseball career.

“He’s the best we’ve ever had on the mound,” Kay said after Jump took a no-hitter into the sixth inning against current state No. 1 Orange Lutheran last week. Jump exited the game after tossing 5 2/3 innings and striking out 13. He allowed just one hit. JSerra won 2-0 in a game the Lions needed to win to have a shot at claiming the Trinity League title.

Even though the game was close (JSerra didn’t score their two runs until the sixth inning), Jump and the Lions never panicked, even when their ace ran into a little trouble in the sixth after he gave up a single and then hit a batter.

Jump calmly struck out the next hitter he faced and then was replaced due to his pitch limit. Tristan Lamaison came on in relief and recorded the final four outs of the game. The next day JSerra beat Orange Lutheran again to win the Trinity League.

“Gage is who we want in that situation and we feel confident with him more so than anyone else we’ve had in the history of our program,” Kay said.

Right now, Jump is 100-percent focused on the CIF playoffs, but he has a major decision coming up. He is committed to UCLA but he’s projected to be drafted as high as No. 44 in July’s MLB Draft.

Whichever path Jump chooses, professional baseball will be in his future. Scouts make frequent appearances at JSerra practices and games to watch Jump and his talented Lions teammates.

When Jump isn’t on the mound, evaluators see a quiet high school senior.

But when he pitches, they get Hulk.