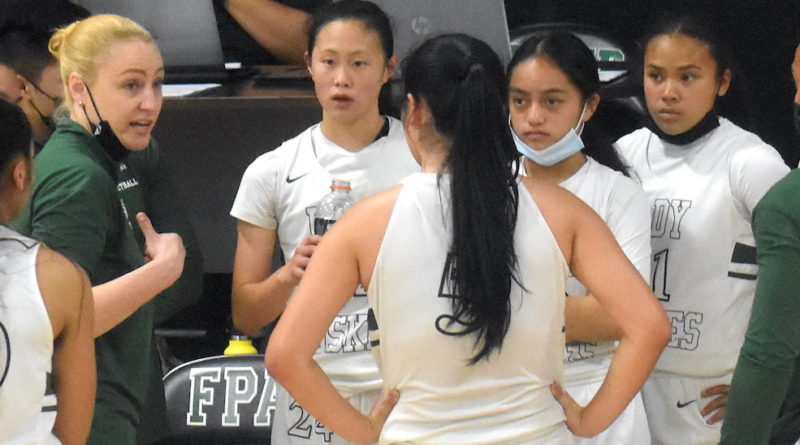 ANAHEIM– AnLing Su Vera led the way with 17 points and eight assists as Fairmont Prep defeated Valley View 60-43 in the first round of the CIFSS Division 1 playoffs.

Ari Long led all scorers with 34 points in an outstanding scoring display for the Eagles despite the loss. Here are three takeaways from the game:

Su Vera and Long had the strongest evenings in this one, and they put on quite a show. Su Vera dominated the first half offensively, scoring 10 in the first quarter and 14 by halftime. By early in the second quarter, Valley View’s defense keyed in on her heavily, and she quickly started racking up assists. Her 17 points came with very few misses from the field.

“She’s a winner,” said Fairmont Prep head coach Sara Brown of Su Vera. “She’s competitive, she’s fierce… she’s definitely the leader of our team. She knows when to be the passer, the shooter, when to get more players involved.”

Long was in double-figures in both halves, but really shined in the second half with 24 points.

“She’s outstanding… you’ve got to give credit where it’s deserved,” said Brown.

Fairmont Prep won the first quarter 15-12, and had more momentum than a three-point differential would indicate because of Su Vera controlling the tempo. It escalated into an 18-3 second quarter for the Huskies, who led 33-15 at halftime with all the momentum in the world. While the game technically wasn’t out of reach at all by that point, it was very clear that the Huskies were not on the verge of a monumental collapse.

Long’s shot-making kept Valley View up with FPA in the second half – the Eagles actually won the second half by one point – but the outcome of the game was never in doubt. Mia Yamamoto was second on Fairmont with 12 points, Makaila Glynn finished with an 11-point double-double, Kayla Ishibashi scored nine points, and Maddie Salud added six. All four notched two or more dimes as well, in addition to Andrea Javier, who had three assists in strong minutes off the bench.

The Huskies finished this game what they already were coming into it: one of the favorites for a Division 1 title despite a crowded field.

Long wrapped up a dominant sophomore campaign in which she averaged over 32 PPG by proving she could still go for 30-plus on the best team she’s faced all season. And she did it shooting over 50% from the field on Friday, an amazing feat considering the degree of difficulty on most of her buckets.

Any team with one of the premier C/O 2023 basketball players in all of California is of course in great shape going forward. But the Eagles will also return their second-leading scorers, Sydnie Trujillo and Kennadi Lauderman for two more seasons as well. While Valley View has a ways to go in terms of depth in order to contend among the Division 1 elites, the stage is set for them to keep building.