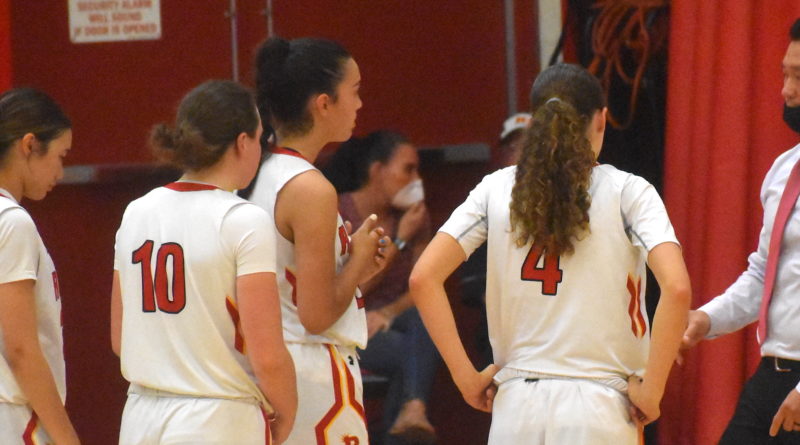 FULLERTON– Rosary Academy made quick work of Los Altos (Hacienda Heights) to open the Southern Section Division 1 playoffs with a bang. The Royals led 21-10 after one quarter, 39-18 at halftime, and added the oomph with a 28-5 third quarter that they finished leading 67-23.

Kaylee Byon and Allison Clarke led all scorers with 17 points each for the Royals. Here are three takeaways from the game:

The Royals generated enough points in transition alone to win the game, with most of their fast break buckets coming off of turnovers they forced. They pressed for most of the game, and already had full control of the game before ever needing to get into a rhythm in the half-court. Additionally, they were able to get out in transition while still winning the glass on both sides.

Byon, who had 14 points by halftime, controlled the game offensively in efficient fashion. She led the game with a whopping 12 assists in addition to her 17 points despite sitting most of the fourth quarter, and hardly turned the ball over at all. Byon also had a few “gravity” moments off the ball, in which the attention she commanded from the defense by that point in the game freed up another teammate to score.

In addition to Byon and Clarke, two other Royals finished in double-figures: Mary Larson with 13 points, and Ava Dominguez with a 12-point double-double. Kaylani Barker added nine, and McKinley Fregoso scored seven points in their third quarter flurry.

ROYALS LOCK IN ON LIAO EARLY

Christina Liao drained a pair of deep threes early in the first quarter, so when Los Altos did get into their sets from there on out, Rosary was denying Liao out to at least 25 feet. When she did get the ball, the Royals forced her to take them off the dribble, with help defenders already shifting towards her. The fact that she was able to score eight more points and notch three assists against a long, athletic defense that was heavily keyed in on her was impressive.

Liao led the Conquerors with 14 points, and Vhenus Gaoa finished with 12.

While Liao is a hard player to replace, Los Altos will return nearly almost its whole team next season, which will be one of the more experienced and athletic rosters out there. Gaoa has a high ceiling as a lead playmaker, and depth will likely be another strength for the Conquerors. Don’t be surprised to see them improve and go deeper in the playoffs.

As for the Royals, they’re already one of the favorites in a stacked Division 1 bracket, but they’re bringing back an even greater proportion of their current squad next season. Rosary Academy is the two-time reigning CIF Division 1 Southern California champion (and state champion in 2019 – state title games were canceled in 2020), and was a no-brainer to make the CIFSS Open Division last season. Even with another potentially massive playoff run underway, it’s hard not to look ahead to their 2021-22 season, which is just around the corner.

**Here are our photos from the game.