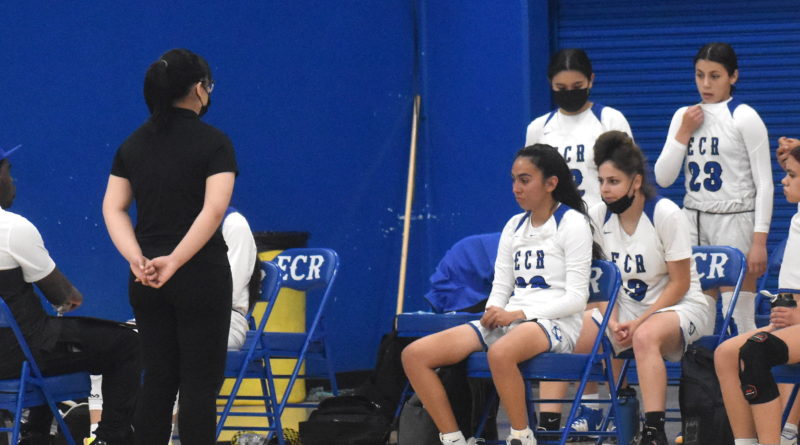 WOODLAND HILLS– El Camino Real picked up perhaps its biggest win of the regular season on Monday in a 41-33 win against Granada Hills Charter.

In a match that was well-defended on both sides, no player on either team cracked into double-figures. Audrey Quintana and Gaby Quintana, who battled through an early leg injury, led Elco with eight points each, and Payton Love added seven. Here are three takeaways from the game:

Neither team was at its peak offensively in this one, but both defended at a high level for much of the game. Granada Hills was the first to particularly set the tone on that end, forcing a lot of turnovers with trapping both in the full-court and half-court, and it led 26-18 after a half.

ECR forced turnovers and prevented easy looks in the first half as well, but really shifted into high gear on both sides of the ball entering the second half. The Conquistadors contained penetration well, and made sure that their turnovers and offensive rebounds allowed didn’t lead to easy buckets. They held Granada completely scoreless in the third quarter and to seven points in the fourth, winning the second half 23-7.

The victory was their second this season over GHC, and they have the opportunity to avenge an earlier loss to Birmingham on Thursday. This win locks up at least a second-place finish in league, and a finish near or in the top five in the Open Division.

With only seven games under their belt now, the Conquistadors are still finding their rhythm offensively, but are one of the absolute scariest teams in the section on that end. If they play every game on defense in the playoffs like they did in the second half, they’re a favorite to return to the semifinals and quite possibly go farther. Additionally, the ability to fall behind eight points and come back from it twice on a low-scoring night without losing any sense of poise bodes well for the postseason.

GRANADA HILLS JUST A FEW SHOTS AWAY FROM CONTENDING

This was a rough loss for the Highlanders on an off-night offensively, but defensively they’re a safe bet to hold any team in the section below it’s season average. This game was just a few buckets away from being an outstanding defensive victory for them, as opposed to what they’ll likely consider one of the most disappointing losses of their season.

They were plagued by turnovers in this one, with a concerning number coming unforced in live-ball situations. But that’s one of the easier afflictions to tighten up in basketball for a team that is clearly committed to executing well. The fact that they only allowed 41 points to a team as talented offensively as ECR after giving them so many fast break opportunities via turnovers is a testament to outstanding defense. And when they did get into their sets, there were moments of promise.

All in all, Granada could be a finals team too, even though this loss will hurt its seeding. The Highlanders’ perimeter players can knock down open threes and finish plays well enough to score in pressure situations. Leeno Vo and Colleen Navasartian in particular proved that as juniors in the 2020 postseason, and can carry a significant scoring load any given night when the offense is in a flow. But the Highlanders will have to dig deep for playmaking against the elites.

** Here are all our photos from the game.