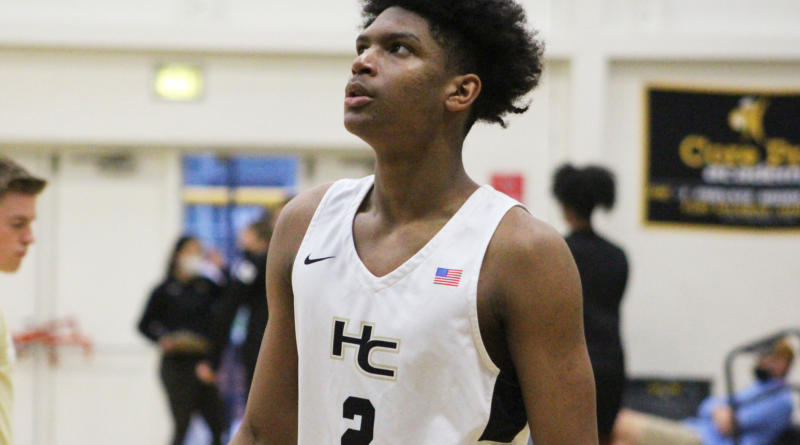 The spring 2021 high school boys basketball regular season ended last week in the Southern Section, so this week’s statewide rankings will be our last until after Section championships (for Sections that are holding championships) and regional playoffs take place. Sierra Canyon finishes their regular season as the wire to wire No. 1 team in the state.

Here’s a look at the top teams in California for the week of May 24. SBLive’s statewide high school boys basketball rankings are compiled by SBLive California reporter Connor Morrissette and are released every Monday throughout the spring 2021 season.

Amari Bailey scored 26 points to lead Sierra Canyon to an 88-76 win over No. 11 Heritage Christian on Saturday.

The Cougars have beaten Salesian College Prep, No. 13 Archbishop Riordan, Bishop O’Dowd, No. 23 Clayton Valley Charter and De La Salle this season. They’re the clear No. 1 team in Northern California.

Torrey Pines is two wins away from a perfect regular season. Their best win came against No. 4 Corona Centennial.

Centennial has won 17 games in a row including an overtime win over No. 7 Ribet Academy. They’re the top seed in Pool B in the Southern Section Open Division.

Mater Dei will be without star senior Wilhelm Breidenbach for the remainder of the season due to a knee injury. The Monarchs lost their first game of the season without Breidenbach 69-56 to No. 6 St. John Bosco last week.

Beware of St. John Bosco’s three-headed monster of Scotty Washington, Jeremiah Nyarko and Lamaj Lewis (LMU commit) in Pool A of the Southern Section Open Division playoffs. The Braves have won seven games in a row.

Ribet Academy lost to No. 4 Corona Centennial 79-75 in overtime two weeks ago but bounced back with a 71-69 win over No. 11 Heritage Christian last week. The Fighting Frogs are in the Southern Section Open Division playoffs.

Harvard-Westlake won the Mission League and made the Southern Section Open Division playoffs.

Etiwanda lost to No. 8 Harvard-Westlake 71-62 two weeks ago. The Eagles are in Pool A of the Southern Section Open Division.

Damien has only lost two games this season and they both came against No. 9 Etiwanda, once by four points and a second time by three points. The Spartans are in Pool B of the Southern Section Open Division.

Heritage Christian showed they are one of the top teams in the state in their close defeats to Ribet Academy and Sierra Canyon in the past two weeks. They’re the No. 1 seed in the Southern Section Division 1 playoffs.

Archbishop Riordan returned to the rankings last week after winning five games in a row including a 77-66 win over No. 14 Capital Christian. The Crusaders have now won eight straight.

Capital Christian’s two defeats this season have come against No. 23 Clayton Valley Charter and No. 13 Archbishop Riordan. They’ve beaten No. 15 Archbishop Mitty and No. 18 St. Joseph.

Mitty has won nine games in a row, but their one defeat came to No. 14 Capital Christian.

Modesto Christian has won 13 of their 14 games by double-digits so far this season.

Westchester took down rival Fairfax 60-52 on Saturday behind 22 points from TJ Wainwright.

The Knights hung around with No. 1 Sierra Canyon earlier this month before ultimately falling 72-59 and last weekend they fell to No. 14 Capital Christian 66-64. St. Joseph has a very talented team led by junior guard Dre Roman.

A balanced scoring attack from Colony led to a 72-69 win over No. 21 Chaminade earlier this month, which was the Titans best win of the year. They’re the No. 1 seed in the Division 2AA playoffs in the Southern Section.

Cathedral Catholic lost to No. 5 Mater Dei 63-60 on Saturday.

Chaminade picked up a huge win over No. 8 Harvard-Westlake two weeks ago but then lost to 5-11 Notre Dame.

The Wildcats are the clear top team in the Foothill League. Corey Cofield scored 29 points in a win over Saugus two weeks ago.

Dublin split their games with East Bay League foe Granada last week, which dropped the Gaels to No. 24.

After starting 0-2, Salesian College Prep has won nine straight which has propelled the Pride into this week’s rankings.