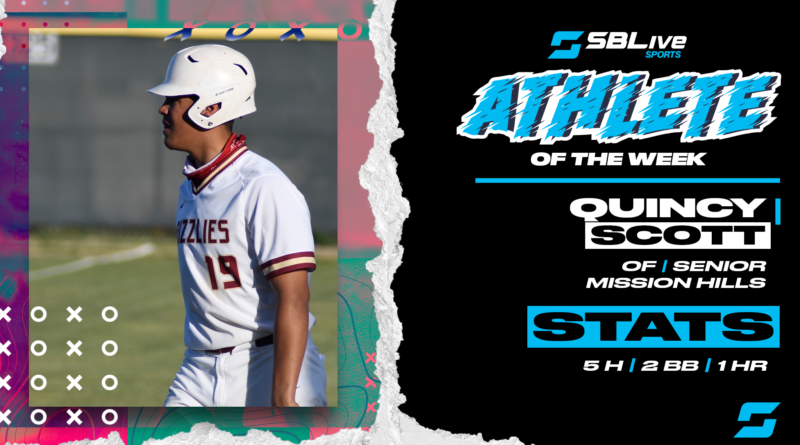 Congratulations to Mission Hills senior Quincy Scott for being voted SBLive’s Southern California High School Athlete of the Week for May 10-16!

The senior had five hits including two doubles and a home run to help the Grizzlies sweep Fallbrook.

Scott received 52.62% of the vote, beating out El Camino INF Jade Ignacio who finished second with 41.78%. Centennial (Bakersfield) OF Korey Likens finished third with 4.01% and Morse INF Edwin Alba finished fourth with 0.64%. There were over 29,000 votes tallied this week!

Edwin Alba, Morse INF: Alba had seven hits and five runs batted in during the final two games against Lincoln last week to help the Tigers sweep the Hornets.

Korey Likens, Centennial (Bakersfield) OF: Likens had four hits including two doubles and a home run in two wins against Stockdale last week.

Keslyn Henson, Linfield Christian G: Henson had 38 points in a win over Arrowhead Christian and followed it up with 39 points against Western Christian in her next game.