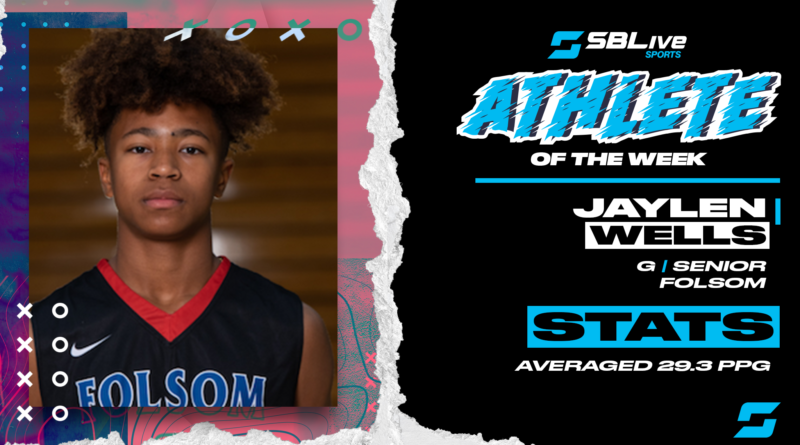 Congratulations to Folsom senior Jaylen Wells for being voted SBLive’s Northern California High School Athlete of the Week for May 10-16!

The senior led Folsom to a 2-1 week averaging 29.3 points per game.

Jincho Rivera, Santa Maria boys basketball: While Santa Maria had numerous players put up AOTW-caliber numbers in last week’s 5-0 showing, including Angel Ortiz, Samuel Bazunga, Steven Vasquez, and Dre Roman, Rivera gets the nod. In the Knights’ first three games of the week, Rivera averaged 23.3 PPG on 61.4% shooting, plus 10.7 RPG, three APG, and 2.3 SPG – before sitting out most of their last two blowout wins.

Jzaniya Harriel, Antelope girls basketball: The 4-star Stanford-commit scored as many points as Antelope’s opponent in a 69-28 rout of Woodcreek.

Jasmine Ackerman, Aptos girls basketball: Ackerman led the Marines to a 2-0 week, including a huge win over Santa Cruz, with 16.5 points, 14.5 rebounds, three assists, two steals, and 1.5 blocks per game with an EFG of 53.8%.

AJ Hutcheson, Elk Grove baseball: Hutcheson led Elk Grove to a dominant 3-0 sweep of Consumnes Oaks going 5-11 with a home run, a double, five runs scored, and three RBIs, plus a 6.1-inning win on the mound with only one run allowed.

Jaylee Ojo, Sheldon softball: Ojo led the Huskies to a 3-0 week batting 5-9 with three doubles, a home run, and six RBIs, plus a win in the circle.

Riley Wickum, Sutter softball: Despite amazing performances from Olivia Bauer and Meadow Topete, Wickum gets the nod for her dominance in Sutter’s 4-0 week. She got wins in all three of her starts, throwing two complete-game shutouts and allowing a total of two earned runs in 19 innings. On top of that, she went 10-13 at bat with two walks and five RBIs.

Ryan Maddox, Clovis North softball: In both of the Broncos’ games last week against Central and Buchanan, Maddox threw complete game shutouts. She only allowed five combined baserunners, and struck out a total of 23. Maddox also went 3-7 with an RBI and two runs scored.

Caitlyn Foster, Livermore softball: Foster got wins in the circle in both of Livermore’s games last week, totaling 10 innings with only one run allowed and 19 strikeouts. She also went 2-4 with two walks and a run scored.