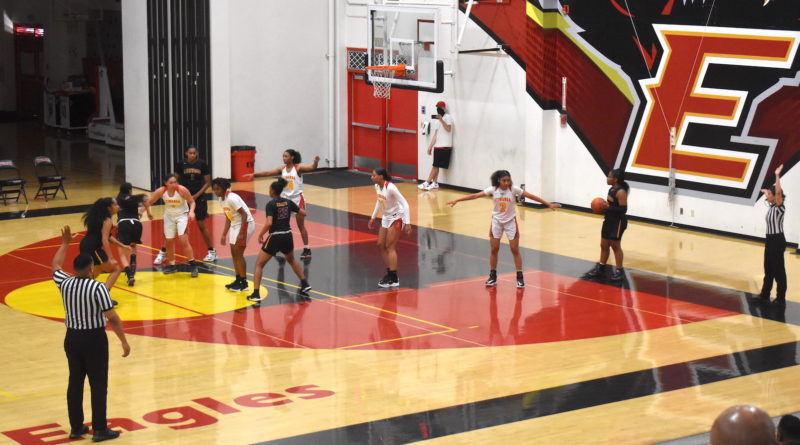 The contest featured two Southern Section Open Division teams that each had only one loss coming in. Freshman Kennedy Smith had an impressive 25-point performance for Etiwanda despite the loss. Here are five takeaways from the game:

MARSHALL DOES IT ALL

This isn’t breaking news, but Marshall, who stands 6-3 and can legitimately play all five positions on either side of the ball, is an uncommonly complete basketball player. Her 37 points came on post-ups, drives of her own creation, short jumpers, at the foul line, in transition, and even on a deep ball. She also led the game in rebounds, grabbing what appeared to be at least 15 of them, impacted the game with both long outlet passes and half-court playmaking, and changed the game defensively both at and away from the rim.

Marshall doesn’t score 37 points every night, but dominating the game in nearly every facet is something you can count on any time she’s on the floor.

Unfortunately, this isn’t the full Etiwanda team that started the season 14-0 with wins over many of the best teams in SoCal. Star junior Daisia Mitchell broke her leg earlier this month, and the Eagles just recently lost senior Fresno State commit Jessica Peterson for the season as well. To top it off, freshman Destiny Agubata is out with a concussion, and sophomore Majesty Cade is playing heavily impacted by an injury she’s working through.

Lynwood still took down a powerhouse on Saturday, and while the game was often closer than the final score was, the Knights did it with 17 points to spare. But the absence of most of Etiwanda’s starting five was noticeable. Etiwanda head coach Stan Delus said after the game that the current injury situation – for a team that was previously unbeaten and will be in the Open Division – is the biggest challenge he’s faced in his six years there.

KNIGHTS MAKE UP FOR LACK OF SIZE WITH PHYSICALITY

Outside of Marshall, Lynwood is on the smaller side as far as Southern Section elites go. But the Knights are very comfortable crashing the boards as a team, and simply setting the tone with naturally physical play from one through five. That includes using their fouls when appropriate, and taking charges frequently. As usual, don’t expect bigger overall teams to be able to bully them in the postseason.

LYNWOOD IS READY FOR THE OPEN DIVISION

It’s no secret that with Lynwood’s loaded senior class, which includes Marshall, Briliyah Taylor, Jada Turner, Honesty Hasson, and Jada Laititi, this season is the Knights’ best opportunity to compete in the Open Division. And they’re ready.

In fact, not only were the Knights already in the Open Division last season, but they were very competitive. Coming in as the eighth seed, many counted them out from coming close to the championship game, but they pushed Sierra Canyon, Mater Dei, and Etiwanda all down to the last minute, losing the three games by just 14 total points.

This year though, Lynwood has a real chance to not only make a strong showing in the Open Division, but win games. While its foe on Saturday was nowhere near 100%, it was still a reminder to watch out for Lynwood.

Taylor was second on the Knights with 12 points, and Turner and Jaushylynn Ruffin added six each.

Before the Eagles recently lost Mitchell and Peterson for the season just in the past couple of weeks, they were undefeated, a clear top-three team in the state, and a major threat to win the Open Division title. Etiwanda will now be an underdog in most or all of its Open Division games, and that’s a gut punch after the season they were having, but the Eagles are set to compete for state Open Division titles for years to come. That starts with the 2021-22 season, in which they’ll be as much a favorite as anybody.

Mitchell, one of the best guards in the section as a junior, is expected to make a full return well before the start of next season, and Talia Garner will be back as a senior as well. Smith is a legitimate 5-star talent in the C/O 2024 who is already primed to play at a star level on a regular basis, and has significantly more upside.

Agubata, Cade, and Jaiya Mix, who had eight points and five assists on Saturday, headline the rest of a deep young core in place – in addition to an incoming freshman who Delus referred to as “probably the best [C/O 2025] point guard in the state, a day one starter”.

Here are all our photos from the game: