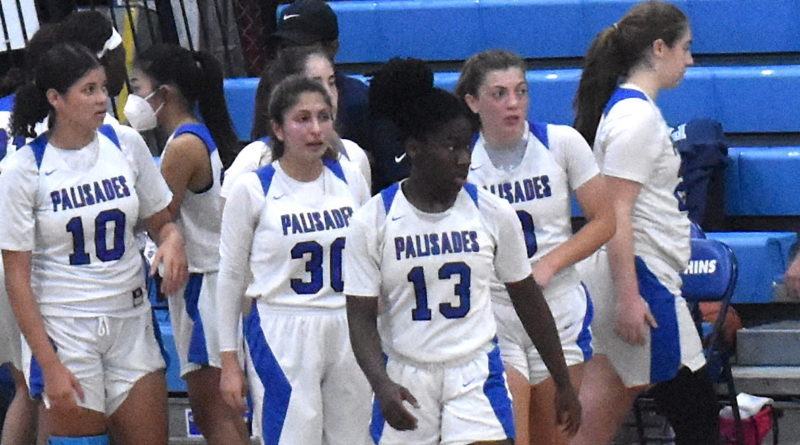 The Dolphins jumped out to a 16-8 lead in the first quarter, and held a lead between nine and 13 points for nearly the entire rest of the game. Taylor Arnold led Palisades with 14 points and nine rebounds, and Sydney Blevins led all scorers with 16 for Hamilton.

While the Dolphins still have matches scheduled against Westchester and Venice (which is yet to play a game), this game effectively clinched a league title for Pali. Here are three takeaways from the game:

The theme of the game was a heavy sense of both teams being far from 100% physically.

Palisades missed starting W Demonnie Lagway due to injury for yet another big game as a late scratch. Starters Sammie Arnold, Taylor Arnold, Ivy Scott, and key reserve Elise Arnold have all been dealing with ailments as of late. Taylor Arnold went down with what appeared to be a tweaked ankle in the fourth later. To top it off, starting PG Alexis Pettis took at least three very hard falls, including one in which the back of her head slammed against the court, and returned to play banged up every time. And the team was playing its 10th game in 17 days.

Meanwhile, Hamilton wasn’t dealing with injuries per se, but was on the tail end of the dreaded back-to-back-to-back, and a run-and-gun offense that put up 72 points against Brentwood a day prior was visibly exhausted. So, perhaps the two best teams shooting teams in the section were leaving shots on line but very short all night. Correct defensive rotations were made, but multiple steps slower than usual.

While neither team executed at the level they’re accustomed to – understandably – both showed showed toughness.

PALISADES’ GAP AS LARGE AS EVER

Reigning City Section champion Palisades hasn’t lost a game to any City Section opponent in the past two seasons, despite having played nearly all the section’s other top teams – including Hamilton four times and counting. The bad news for the rest of the section’s contenders is that this season the Dolphins are beating the other top dogs missing one or more key players. Hamilton and Birmingham are two of their biggest threats to repeat, and they’ve beaten both of them without Lagway.

Now factor in that Palisades is about to get back one of the premier players in the section, and the Dolphins’ championship chances look better than ever.

HAMILTON WILL LIVE TO FIGHT ANOTHER DAY

This loss stung for the Lady Yankees, but this wasn’t their best shot. And there were some very promising signs, particularly that Palisades spent most of the game on the verge of putting them away, but Hamilton always hung around without ever getting into any rhythm. Multiple times, Hamilton cut the lead to seven, and it was still a contest with under two minutes to play.

Palisades is likely to bring a significantly better effort should these teams meet in the Open Division semifinals or finals, but Hamilton is more than capable of doing the same.