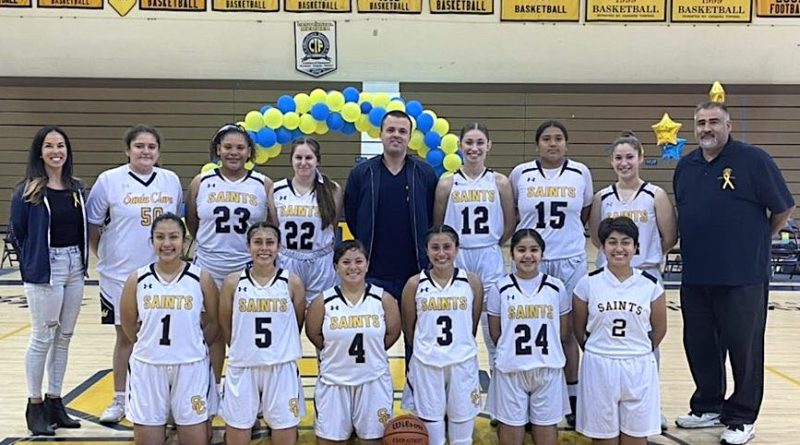 With high expectations, a new head coach, a young team, and only a couple of hours of practice time a week, Santa Clara girls basketball didn’t have an ideal hand of cards heading into the spring season.

But the Saints were not to be denied in their repeat bid as Tri-Valley League champions. And this season, unlike last season, they went unbeaten in league play to claim the league title outright, with no tie atop the league standings. It’s been a fast but special season at Santa Clara for first-time head coach Nick Kindel and the Saints.

Almost their entire varsity girls basketball team plays softball as well. In a pandemic-altered season when basketball and spring sports overlap directly, that meant only a 10-game regular season slate, and only three hours of practice a week – sometimes less – to make sure the girls could make it to softball.

That didn’t deter Santa Clara, who some expected to take a step back from last season after losing key seniors.

“It’s all been because of the girls,” said Kindel. “It’s special because I’m a new coach, and they put all their trust in me when I only have them for an hour-15 at a time, because they realize it’s all business.

“I’ve gotten great leadership from seniors Sofia Maldonado and Maddyson White. Also, the softball coach and I have a good relationship, so we’ve worked together to make it work for everybody.”

With so little practice time, Kindel said Santa Clara used its few non-league games as teaching moments more than it would in a normal season.

“I wouldn’t say I treated them as ‘practice games’, but since the girls really cared about the league championship, I used non-league games as games where I can focus on working on getting us ready for league.”

Per Kindel, the biggest key in terms of X’s and O’s has been an increased sense of identity on defense.

“We really got into it on defense all year. The girls had a full buy-in. I’ll never yell at you for a bad shot, but I will for not getting a stop. As long as we play defense, everyone has the green light [on offense], and the shots will fall. If the girls stay confident, you’ll be fine.”

Kindel saw that the team he was inheriting had a promising blend of size and speed, so he implemented what he describes as a “super extended, active 2-3 zone.” Sometimes defensive schemes along those lines lead to getting beat on the defensive glass, but the Saints were able to defend far from the basket and still finish stops with defensive boards.

Maldonado, who’s likely to be named league MVP, averaged over three steals per game, in addition to over 14 points per game. Sophomores Abrial Ramirez and Yazmin Wiggins led the charge in terms of rebounding and protecting the paint. And the Saints got clutch, energetic play all season from White and Amanda Flores, another senior, plus sophomore Ani Maldonado (Sofia’s sister) running the point effectively in her first varsity season.

Tuesday’s win against Foothill Tech, which pushed them to double-overtime earlier in the season, was a signature win for this season’s Saints squad despite a slow offensive start. Santa Clara trailed at halftime, but hardly allowed a single bucket in the second half, and White erupted for 14 points in the fourth quarter as the Saints held Foothill Tech to just 22 points to secure an undefeated league run – on Senior Night no less.

While the Saints have already achieved their ultimate goal of winning their league outright, they might have a CIF Southern Section 3A playoff run ahead of them before turning their attention to next season.

“Our division is tough, and we don’t know what our seed will be because we only played 10 games. So our mindset is, go upset everybody,” said Kindel. “Let’s go in as underdogs no matter what our seed is, and just make some noise and go have fun.”