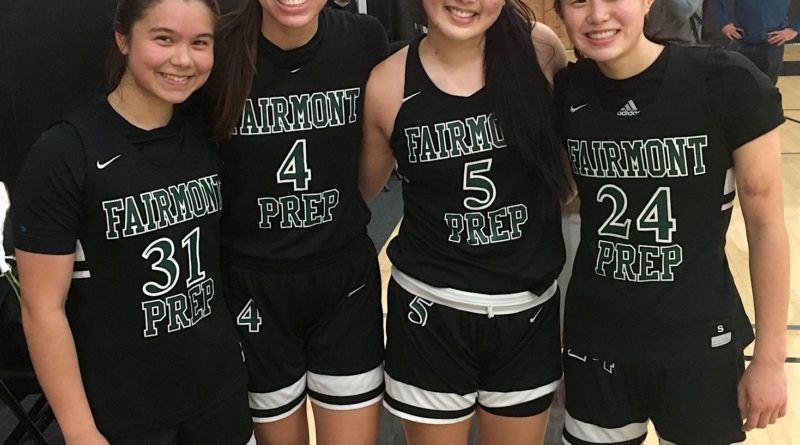 NEWPORT BEACH– Fairmont Prep has claimed a piece of the San Joaquin League title, tied for first with Orangewood Academy, for the second straight season thanks to a 53-40 win over Sage Hill. Here are three takeaways from the game:

This was the last ever regular season game for the Huskies’ outstanding 2021 class. The senior core of guards AnLing Su Vera and Kayla Ishibashi, and forwards Makaila Glynn and Mia Yamamoto, accounted for all of Fairmont Prep’s offensive production other than eight points from Maddie Salud. Despite a few more unforced turnovers than usual from one-off miscues, the Huskies were a ball-moving force in the half-court for most of the game, with almost every field goal coming off of an assist.

Ishibashi led the way with 17 points, Yamamoto scored 16 points, and Glynn added 12 points. Su Vera didn’t get in the points column – she hardly attempted a single shot – but led the game with a whopping 11 assists, plus multiple “hockey assists” on shots created directly by her penetration.

Before either team got going from the field, it was Fairmont’s defense right out of the gate that set the tone for the rest of the game.

The Huskies didn’t have a great first 10 minutes or so themselves offensively, but they only allowed two points in the entire first quarter. They forced five turnovers well before the first quarter was over with some great half-court trapping, and were able to contest shots facing a foe with both more size and a dominant scoring/playmaker guard in Isabel Gomez. Fairmont Prep also boxed out at a high level, led by Glynn and Yamamoto, and finished stops with boards at a good clip despite their size disadvantage.

Eventually, Gomez really got going, and scored most of her 21 points in the second and third quarters, mostly going one-on-one through the heart of the opposing defense. But by that point, Fairmont Prep’s offense was clicking as well, and some defensive adjustments to contain her proved very effective.

SAGE HILL MIGHT BE GEARED UP FOR DOMINANT PLAYOFF RUN

It’s no secret that Fairmont Prep, a reigning 2AA finalist, is a full-fledged championship contender in either CIFSS 2AA or Division 1, if they get moved up.

However, it needs to be said that if the Lightning remain in 3AA, or are even moved up to 2A, they could very well be the top favorite to win it all. They don’t have a lot of big-name teams on their list of defeated opponents, but Sage has nearly defeated Fairmont Prep and Orangewood Academy twice, and took Sierra Canyon down to the wire. That says more than enough about what the Lightning can do in the playoffs. Throw in the fact that they’re led by talented upperclassmen with continuity in Gomez and Emily Elliott, and they’re one of the safest bets in the section to go far this spring.

**Also, here are our game photos below: