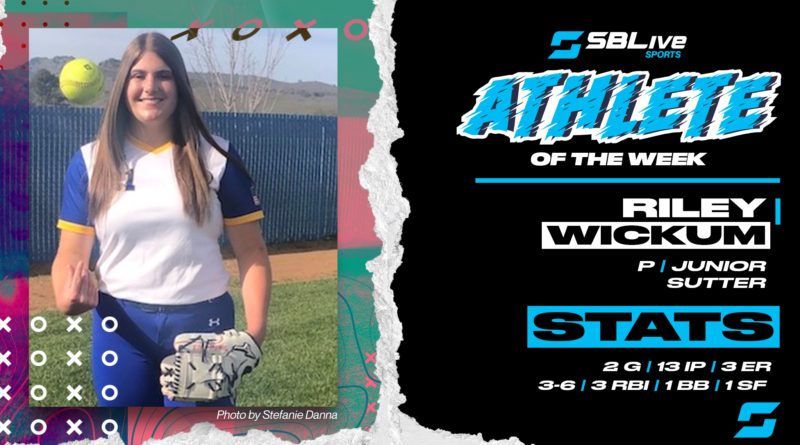 Congratulations to Sutter junior Riley Wickum for being voted SBLive’s Northern California High School Athlete of the Week for May 3-9!

Wickum was dominant in the circle in both wins of Sutter’s impressive double-header against Lassen on Saturday. She threw 13 innings, allowed only three earned runs, and got the decision in both games. Wickum also went 3-6 with three RBIs, a walk, and a sac fly.

Wickum received 45.78% of the vote, beating out Saint Francis (Mountain View)’s Shannon Keighran who finished second with 34.64%. Archbishop Mitty’s Chris Stivaletti and Anthony Sanguinetti tied for fourth with 8.86%. There were over 45,000 votes tallied this week!

Samantha Rocha, Notre Dame (Salinas) softball: Rocha got wins in both of the Spirits’ games last week, throwing five innings with one earned run in a 2-1 win over San Benito, and throwing a complete game (seven innings) shutout with 15 strikeouts against Monterrey. She also hit against Monterrey and went 2-3 with an RBI-triple and a run.

Aissa Silva, Elk Grove softball: Silva threw a complete game (seven innings) with only an unearned run allowed and 11 strikeouts in a 10-1 win against Davis. She also threw 2.1 innings with no hits or runs allowed the day before in a loss against Sutter.

Malaya Johnson, Roseville softball: Johnson was unreal in the circle as Roseville went 3-0 last week. On Monday and Wednesday she threw complete game (seven out) two-hitters with 12 strikeouts each and only one earned run allowed between them. On Friday, she threw 4.1 scoreless innings in a 7-5 win against River Valley. Additionally, Johnson went 4-10 with two doubles, three RBIs, and two runs scored in those games.

Jaylee Ojo, Sheldon softball: Ojo practically hit through the cycle in Monday’s 19-1 rout of McClatchy, going 3-3 with a double, a triple, a home run, and a walk, with four RBIs and four runs scored. The next day, she threw a complete game shutout in a 10-0 win over Pleasant Grove, and went 2-5 with an RBI and a run scored.

Jenna Birch, Del Oro softball: In a 13-1 rout of Granite Bay, Birch got the win in the circle with one earned run allowed in five innings, and also went 2-3 with three runs scored at bat.

Shannon Keighran, Saint Francis (Mountain View) softball: Against one of the state’s most explosive offenses in Archbishop Mitty, Keighran, a freshman, threw seven innings with no earned runs for a win.

Brooke Davis, Escalon softball: In an 8-4 win against Sierra, Davis went 3-4 with two doubles, and also a complete game win (seven innings) in the circle.

Lexi Holihan, Vista Del Lago softball: Holihan pitched a complete game win on Monday against Del Campo, and went 3-4 with a home run at the plate. Then she threw four hitless, scoreless innings in a 5-0 win against Rio Americano on Wednesday and struck out nine.

Stella Gidcumb, Paso Robles softball: In a three-game series sweep of Righetti last week, Gidcumb went 7-10 with a homer and two doubles, plus three walks. She drove in seven and scored a whopping eight times.

Carson Gomes, Arroyo Grande baseball: In two wins against Righetti, Gomes went 5-6 with three doubles and two RBIs. He also threw a complete game (seven innings) victory on the mound with only one run allowed.

Sam Frizzi, Elk Grove baseball: Elk Grove took two games out of three against Jesuit last week, and Frizzi was key in both of those wins. On Monday he threw a complete game (seven innings) win with two earned runs allowed, and went 1-3 with a 3-run triple and a walk. He also went 2-3 with a walk and a run in Friday’s 6-5 win.

Will Heron, Rio Americano baseball: Rio Americano swept El Camino in three games by a crazy aggregate score of 47-0, featuring some eye-popping stat lines from Daniel Giberson, Will Lindberg, and Nolan Barry. But Heron’s was the best: 7-10 with three home runs, a double, seven RBIs, and five runs scored.

Bella Stevens, Santa Cruz girls basketball: Stevens averaged 24.3 points per game, 5.3 rebounds, and 3.3 steals per game in a 3-0 week shooting over 55% from the field.

Malia Cabigon, Righetti girls basketball: Cabin dropped 27 points and 18 rebounds in a win over Santa Barbara, and also went for 15 points and six boards in a victory against Orcutt Academy.

Andrej Stojakavic, Jesuit boys basketball: Stojakavic, son of Sacramento legend Peja Stojakavic, had 17 points and nine assists in a 53-48 win over Granite Bay, and erupted for 34 points, 13 rebounds, two assists, and two blocks on 15-21 shooting in a 53-46 victory against Sheldon.