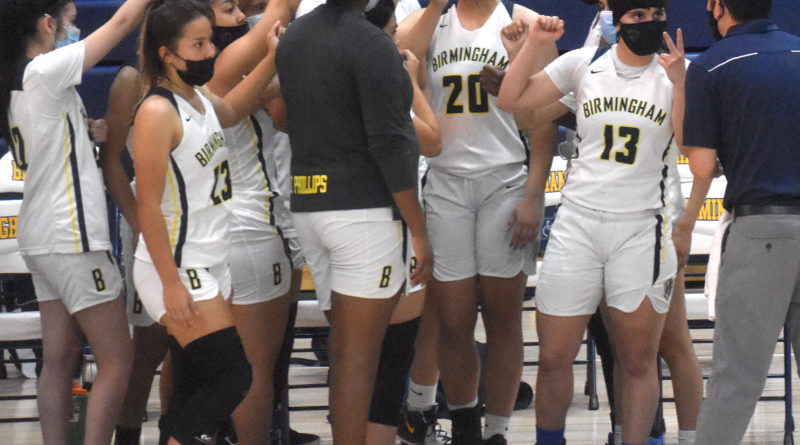 LAKE BALBOA– It looked like a blowout might be in store when Birmingham led El Camino Real 20-10 after a quarter on Thursday in both teams’ West Valley League opener.

But the Conquistadors came storming back to tie the game at 26 in the second quarter. The Patriots then showed the poise to regain the momentum to finish the quarter on an 8-2 run and put ElCo away in the second half, giving up just three points in the fourth quarter. Here are three takeaways from the game:

The Patriots held a potent ElCo offense to just 43 points – even with the Conquistadors hitting a number of tough shots – capped off by allowing only three points in the fourth quarter. Against an offense with substantial floor spacing and multiple playmaking threats from the perimeter, Birmingham’s defensive rotations were sharp. So, the Patriots were able to keep one to two paint-oriented bigs on the floor at all times without getting beat from outside, and reaped the benefits by winning the rebounding battle.

MEDINA PROVIDES SPARK OFF THE BENCH

For a team with only a couple bigs, the absence of one of its top paint anchors, Jaylee Hall, was noticeable in this one. ElCo fought pretty hard as a team to keep the defensive glass from taking them out of the game, but at times it was at the expense of their transition offense. Ultimately, Birmingham still controlled the tempo for most of the game, but Hall’s rebounding and rim protection could’ve helped. Sophomore Gianna Pitts did a good job protecting the rim in extended run in her absence.

Janna Holley led all scorers with 14 points for Birmingham. The Patriots also got 10 points from Bita Hashemi, and Aliah Medina, Samantha Velasquez, and Jaz Washington all added nine.

Audrey Quintana led ECR with 13 points, and Alanna Topete and Gaby Quintana both finished with eight.