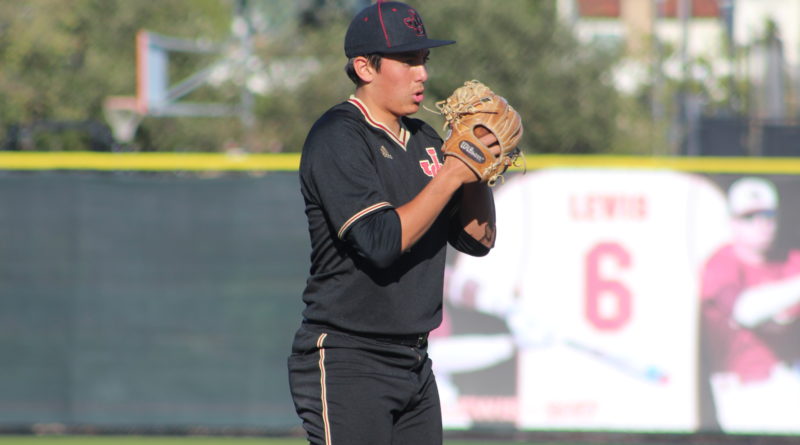 JSerra made another big jump in this week’s statewide baseball rankings after sweeping No. 19 Santa Margarita last week. The Lions have won 12 straight games after starting the season 4-5 and are ranked No. 4 this week.

No. 1 Thousand Oaks continues to dominate their competition in the Marmonte League and have scored double digit runs in 12 of their 19 games so far.

The Lancers continue to dominate their competition as they enter the second half of league play. They’ve scored five runs or more in each game this season.

The Lancers swept Mater Dei last week to move to 7-0 in Trinity League play. They start a huge three game series with Santa Margarita this week.

The Bears swept Clovis last week to move to 6-0 in Tri-River League play.

The Lions have won 12 straight after last week’s sweep of Santa Margarita.

The Bulldogs have won 11 straight games and have scored 61 runs over their past four games.

The Wolverines have won six straight after sweeping Crespi and sit atop the Mission League standings.

The Panthers swept Fresno Edison in their first league series of the season.

The Padres are atop the league standings as they begin a series against St. Ignatius this week.

The Trailblazers have shutout their last two opponents and will host Crossroads twice this week.

The Red Tailed Hawks took two of three games from Marin Catholic. They’ve stolen 40 bases as a team so far.

The Monarchs swept Bellarmine Prep last week, shutting them out in two of the three games.

The Saints have won seven straight and have jumped out to a 4-0 start in Western League play.

The Cardinals took two games from Windsor to continue their undefeated start.

The Patriots are allowing less than three runs per game during their 8-1 start.

Junior outfielder Austin Overn is hitting .437 with 22 stolen bases for the Knights.

The Eagles were swept by JSerra last week and begin a series against Orange Lutheran this week.

The Thundering Herd took two of three games from Jesuit and lead the Delta League with an 8-1 record.

The Acorns are beating their opponents by over five runs per game so far.

The Highlanders bounced back from their loss to Simi Valley with five straight wins.

Zander Darby is hitting .429 with three home runs for the Vikings.

The Spartans have been dominant during their current seven-game winning streak.

Senior Gavin Tonkel is hitting .375 with ten stolen bases for the Patriots.