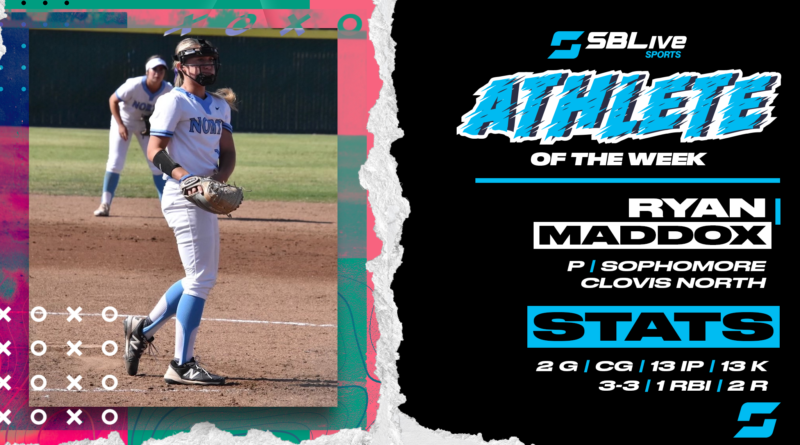 Congratulations to Clovis North sophomore Ryan Maddox for being voted SBLive’s Northern California High School Athlete of the Week for April 26-May 2!

On Wednesday, Maddox accomplished the rare feat of a complete game shutout in extra innings (eight) to beat Notre Dame (Salinas) 1-0, striking out 13. Then on Friday, she threw five innings with only one run allowed for another win, and also led the Broncos at the plate going 3-3 with a walk, an RBI, and two runs scored.

James Frye, Miramonte F: Frye led the Matadors to a 78-65 win over Acalanes with 25 points on just 11 field goal attempts to go with 11 rebounds and three assists.

Brielle Wright, Rocklin P: Wright threw a complete game shutout (seven innings) and two-hitter in a 2-0 victory against Granite Bay, and also recorded a scoreless inning for a save two days later against Del Oro.

Caroline Grimes, Del Oro P: Grimes started all three of Del Oro’s games, going 2-1 and allowing only two earned runs in 16 innings. She also went 2-4 with an RBI in Monday’s rout of Whitney.

Aissa Silva, Elk Grove P: Silva threw a complete game shutout against St. Francis and three innings with one run allowed against Franklin, both wins. At bat she went 1-3 with a walk in those games.

Jaiden Ralston, Paso Robles P/1B: Ralston went 5-10 with four RBIs as the Bearcats took two games out of three against Arroyo Grande. She also got both wins in the circle, throwing a complete game shutout (seven innings) and two-hitter with 13 strikeouts in one game, and seven innings with only one earned run allowed in the other.

Kasydi Bennett, Yreka INF: Bennett led the way at the plate as Yreka beat Central Valley twice by a combined score of 32-1. She went 5-6 with a walk, four RBIs, and two home runs, and came around to score all six times she reached base.

Malaya Johnson, Roseville P/1B: Johnson was dominant both in the circle and at bat as Roseville went 3-0. She went 6-8 with three doubles and six RBIs, and got the win pitching in all three games allowing five earned runs in 15 innings.

Drew Becks, Live Oak P/INF: Becks was one of several Acorns to dominate in a 3-0 week. He went 1-3 with a three-run triple on Tuesday against Branham, and got a win on the mound Friday against Christopher hurling seven innings with only one run and two baserunners allowed.

Ben Singler, Sequoia 1B: In Sequoia’s second win, Singler went 2-4 with two home runs and six RBIs. He also drew a walk and came around to score.

Ben Silva, McClatchy P/1B: Silva led the Lions to a 4-0 week by going 6-11 with two doubles, two triples, a home run, three walks, and 11 RBIs, scoring nine of the 10 times he got on base. He also threw five scoreless innings in McClatchy’s win over Ponderosa.

Andres Galan, Franklin P/INF: Galan led Franklin to a three-game sweep of Cosumnes Oaks going 5-9 with three runs and three doubles, plus a win on the mound in which he threw five innings with no earned runs.

Ethan Lay, Colusa P/INF: Lay was one of numerous RedHawks to dominate last week as Colusa went 3-0 by a combined score of 39-1. He threw seven scoreless innings across two starts, both wins, fanning 15 and only allowing three baserunners. At bat, he went 6-10 with three doubles, seven RBIs, and five runs scored.

Andy Rios, Calaveras P/INF: In a 2-1 series victory against Argonaut, Rios went 5-9 with two RBIs and three runs scored on offense. He also pitched in both of Calaveras’ victories, throwing a complete game (seven innings) with no earned runs and also recording a three-inning save with no runs allowed.

Logan Johnstone, Los Gatos OF: Johnstone was one of multiple Wildcats to show out in a 4-0 week, going 7-11 with four extra-base hits, seven RBIs, three walks, and three runs scored.