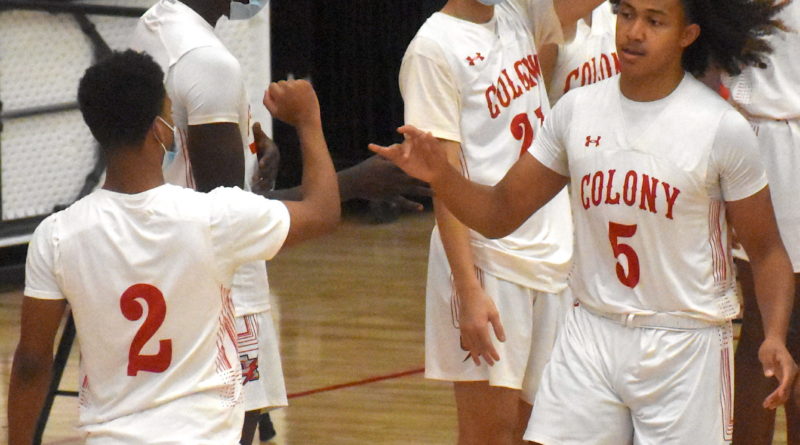 The spring 2021 California high school boys basketball season continues this week with league play for the majority of ranked teams.

Amari Bailey scored a career high with 32 points in a 79-55 win over Crossroads last week. He also had 15 rebounds and 10 assists.

Mater Dei just keeps on winning. Last week, the Monarchs took down No. 10 St. John Bosco and JSerra. They’re 6-0 in the Trinity League.

Etiwanda beat No. 4 Damien thanks to a buzzer-beating three-pointer from Darvelle Wyatt on Friday.

Damien has lost just two games this season and they both came against No. 3 Etiwanda, once by four points and a second time by three points. The Spartans are a lock to make the Southern Section Open Division.

The Cougars have beaten Salesian College Prep, Archbishop Riordan and Bishop O’Dowd to start the season. They’re the clear No. 1 team in Northern California at the moment.

Harvard-Westlake has won nine games in a row. The Wolverines have great young talent led by junior Cameron Thrower and sophomore Brady Dunlap. Their two defeats came against No. 4 Damien and Heritage Christian.

Ribet Academy has won by double-digits in every game they’ve played so far this season. Monday’s game against No. 9 Centennial and then future games against Heritage Christian and No. 19 Birmingham will show if Ribet is a Southern Section Open Division team, but early indications show that they will be. Tyler Powell and Barrington Hargress are off to strong starts.

St. Mary’s commit Chris Howell and Nick Herrmann lead a talented Falcons team that shouldn’t only be recognized as the top team in San Diego — they’re one of the top teams in the state. Torrey Pines best win came against No. 9 Corona Centennial.

Centennial has won 11 games in a row. They have a huge game against No. 7 Ribet Academy on Monday.

The Ugly Eagles are off to a 4-0 start which includes an impressive win over No. 13 Capital Christian.

Devon Arlington has pushed San Marcos to a 17-0 start.

Capital Christian’s lone defeat on the season came against No. 11 Clayton Valley Charter, but the Cougars did record a two point win over No. 14 Archbishop Mitty two weeks ago.

Mitty lost by two points to No. 13 Capital Christian, which pushed the Monarchs to No. 19 last week, but they responded with two wins over Bellarmine College Prep.

Santa Margarita has been one of the surprises of the spring so far thanks to a win over No. 10 St. John Bosco. Jake Blazona and Luke Turner are key contributors. Two weeks ago, the Eagles fell to No. 2 Mater Dei 51-38 and then last week they lost to St. John Bosco in a rematch 56-48.

Modesto Christian has won by double-digits in all of their games so far this season.

Dublin must replace many seniors from last season’s 24-7 team, but they’ll be okay under the leadership of Tom Costello, last year’s Mercury News Bay Area Preps coach of the year. The Gaels finally got their season started last week. They beat Foothill twice.

Westchester began its season with a 65-51 win over Venice. Zion Sutton scored 20 points in the victory.

David Elliott is off to a hot start for the Patriots.

The Knights hung around with No. 1 Sierra Canyon two weeks ago before ultimately falling 72-59. They have a very talented team led by junior guard Dre Roman.

Roosevelt’s win over No. 22 Colony earlier this season is proving to be a big one. The Mustangs lone defeat this year came to No. 9 Centennial 84-47.

A balanced scoring attack from Colony led to a 72-69 win over No. 25 Chaminade. Jaidyn Simpson led the way with 19 points, and the Titans also got 18 from Kollen Murphy, 16 from Brenton Knapper, 10 from Jaden Henley, and nine from Denzel Hines.

St. Augustine picked up a huge win over No. 24 Cathedral Catholic in a 46-39 defensive slugfest.

Obinna Anyanwu (Cal commit) and Dillon Wilhite are two of the top players in San Diego. The Dons lost their first game of the season to No. 23 St. Augustine 46-39 last week.

KJ Simpson and Keith Higgins form one of the state’s best backcourt partnerships. They combined for 57 points against No. 22 Colony, but it wasn’t enough as the Eagles lost 72-69.