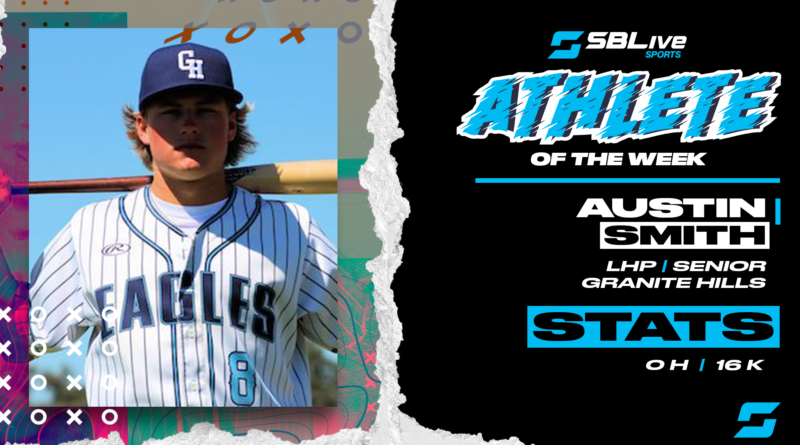 Congratulations to Granite Hills senior Austin Smith for being voted SBLive’s Southern California High School Athlete of the Week for April 26-May 2!

The senior threw a no-hitter, striking out 16 batters to help the Eagles beat West Hills in game one of a doubleheader.

Smith ran away with this week’s honor, receiving 74.57% of the total vote.

Addison Arnold, Royal PG: Arnold had 35 points in last week’s win against Camarillo, including going 16 of 18 from the free throw line.

Chol Deng, Fairmont Prep SG: Deng has scored in double digits in each game so far this season and had 86 points over a four game span last week, helping the Huskies to three wins.

Kyle Frelow, Heritage Christian F: Frelow has been an animal on the boards this season, averaging 14 rebounds per game and has surpassed the 20 rebound mark in three games.

Chloe Briggs, Ontario Christian G: Briggs scored over 20 points in all four games last week including a season high of 46 points against Burroughs. It was her third game this season of 40 or more points.

Londynn Jones, Corona Centennial G: The UCLA commit had 108 points over her four games last week including a season high of 35 points against The Bishop’s School.

Alyssa Kubo, Esperanza G: Kubo knocked down seven three-pointers in her two games last week giving her 45 for the season in only 12 games so far.

Chloe Slack, High Tech San Diego: Slack scored 23 points against Kearny and followed it up with 27 points against Patrick Henry to lead the Storm to two wins last week.

Armin Tehrani, University (Irvine) F: Tehrani had two goals and two assists to lead the Trojans to a 4-0 win over Irvine.