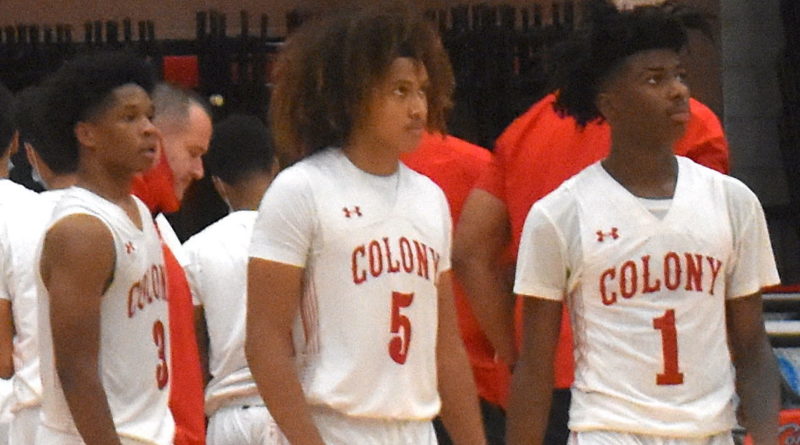 ONTARIO – The fourth and final game of the 2021 State Preview Classic proved to be the most exciting as host Colony held on to beat Chaminade 72-69 despite a thrilling Eagles comeback bid.

Colony lost what was once a 15-point lead in the second quarter, and Chaminade even led by one point led by one in the fourth quarter. Still, despite 57 combined points from Chaminade senior Gs Kenneth Simpson Jr. and Keith Higgins, the less experienced Titans pulled out an impressive win to move to 14-1. Here are three takeaways from the game:

Whereas its foe got 57 of its 69 points from two players, Colony had four players in double-figures. Jaidyn Simpson led the way with 19 points, Kollen Murphy scored 18, Brenton Knapper scored 16, and Jaden Henley added 10 points, with nine coming in the fourth quarter. Denzel Hines also contributed nine first half points.

The Titans’ ball movement was a major factor in their balanced scoring spread. Chaminade pressed for almost the whole first half, and Simpson, Murphy, and Knapper kept the ball moving downhill from basket to basket instead of getting trapped. Numerous Colony buckets came at breakneck speed in transition on just a couple crisp passes and a dribble – it was a press-breaking clinic.

Colony went cold from the perimeter for some of the second half when the game slowed down, but more sharp ball movement led to some closeouts that got attacked effectively. So, despite an off-night from deep, the Titans created dozens of good looks in the paint, and converted them at an exceptionally high clip.

For a team already ranked by some in the top 20 in the state, Colony is reliant on a lot of sophomores and juniors. Murphy, Simpson, and Hines are all in the Class of 2023, and Henley is one of numerous key Titans with another season to play this winter. Just by developing the core that’s already intact, Colony could be a top-10 team in the state in a season or two.

The comeback that almost transpired was a gutsy effort for D-1 commits Simpson (Colorado) and Higgins (Lehigh), who dropped 30 and 27 respectively. Both were in double-digits in the fourth quarter alone. By the end of the game, they were both shooting over multiple defenders and driving through double-teams, and both got better as the intensity rose down the stretch. While Chaminade got just its second loss of the season, that was a brilliant display of shot-making from its backcourt.