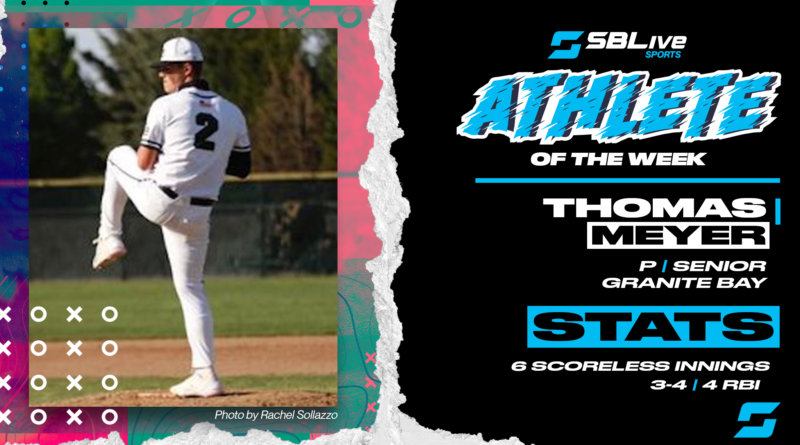 The senior dominated in a 10-0 rout of Oakmont, throwing six scoreless innings and also going 3-4 with four RBIs.

Meyer ran away with this week’s honor, receiving 69.22% of the total vote.

Jzaniya Harriel, Antelope G: In Antelope’s only game last week, Harriel dropped 35 in a 70-45 win over Inderkum. She’s averaging over 30 PPG through four games for the unbeaten Titans.

Emmanuel Callas, Campolindo G/F: Callas led Campo to double-digit wins on Thursday and Saturday against Piedmont and Dougherty Valley with consecutive team-high 20-point performances. He also racked up a total of 17 boards, six assists, six steals, and four blocks in those games.

Isa Silva, Jesuit G: The 4-star Stanford commit led the Marauders with 21 points on 53% shooting, nine rebounds (tied), and two steals (tied) in a 93-62 win over Davis on Friday. He also had three assists and only one turnover.

Brook Thompson, Rocklin P: Rocklin went 2-0 against Folsom and Whitney last week thanks to dominant outings from Thompson in the circle. In an extra-innings win on Wednesday, she pitched all nine innings with no earned runs and 14 strikeouts. She also threw four scoreless innings in Friday’s win.

Caroline Grimes, Del Oro P: Grimes led Del Oro to a 14-5 win over Center with a complete game win in the circle and a 5-5 night at bat, including a home run, a double, four RBIs, and two runs scored.

Randi Roelling, Central Catholic P: Roelling dominated in the circle last week as the Raiders went 2-0. She threw a near-perfect game in a 1-0 pitching duel against Escalon, giving up just one hit and one walk in a complete game and striking out 16. Roelling also gave up just one earned run in another complete game victory against Ripon, striking out 17 and also going 1-2 at bat with a run scored.

Chloe Cummings, Saint Francis (Mountain View) P:Cummings threw six scoreless innings apiece in back-to-back wins against Valley Christian and Presentation, striking out 22. Additionally, she didn’t pitch in last Tuesday’s win against Los Gatos, but she went 2-4 with two RBIs and a stolen base.

Aissa Silva, Elk Grove P/1B/OF: Elk Grove went 3-0 last week, and Silva was unstoppable in the circle, getting the win in each game. She totaled 16 innings and only gave up one earned run, striking out a total of 25 hitters. Silva also went 3-8 with a double and two RBIs in those games.

Ryan Maddox, Clovis North P: Maddox threw 7.1 scoreless innings and struck out 10 in an eight-inning win over Madera. She also drew a walk and scored one of the Broncos’ three runs.

Jamie Hicks, Archbishop Mitty 3B/OF: Hicks was the top performer among many for the Monarchs in a 2-0 week, going 5-7 with two home runs and four RBIs.

Gary Hall, Windsor P: Hall threw six innings with no earned runs in a 3-2 win over Analy, and racked up 15 strikeouts.

Matteo Bellisimo, Tamalpais 1B/C: Bellisimo homered twice as Tam beat Branson twice last week by a total of 19 runs. In total, he went 2-3 in seven plate appearances with three walks and five RBIs.

Mick Kelley, University (San Francisco) INF: Kelley led the Red Devils to a 3-1 week by going 7-10 with nine RBIs and three doubles. University also got a big week at the plate from Kai Seidel.

Sebastian Gonzalez, Berean Christian P/OF/1B: Gonzalez led Berean Christian to wins over El Cerrito and Mountain House with strong work on the mound and 3-hit efforts in both games. Against El Cerrito he went 3-4 with a double, two runs, two RBIs, and a scoreless inning for a save. He threw six innings allowing two earned runs and struck out 11 against Mountain House, and went 3-4 with a triple and a run scored.

Maxwell Banks, Stuart Hall P: In a 2-1 win over Lick-Wilmerding, Banks threw a complete game with no earned runs and 16 K’s. He also got a hit in three ABs.

Noah Canter, Elk Grove C/OF: Canter led the Thundering Herd to three straight wins over Franklin last week at bat and on the base paths. He went 5-10 with a double and two triples, and also reached on a walk and a HBP. Canter went on to score all seven times he reached base.