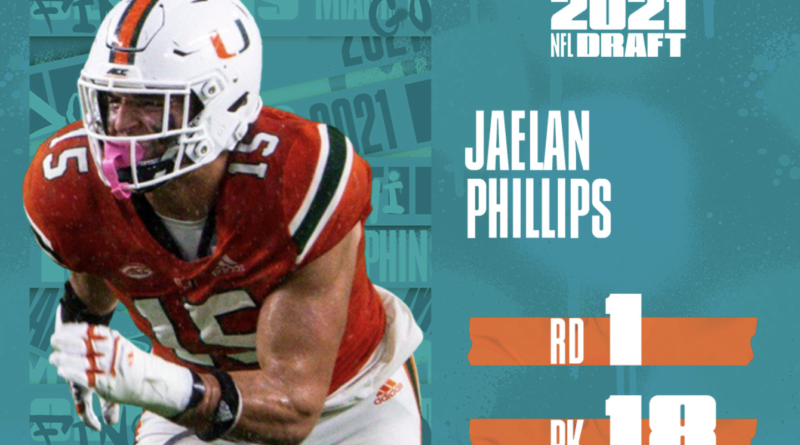 11 former Southern Section high school football stars were selected in the 2021 NFL Draft last weekend. Redlands East Valley grad Jaelan Phillips was the first player taken off the board. Read up on all 11 selections below.

Phillips was a five star prospect coming out of Redlands East Valley. In high school as a senior, he was credited with 142 tackles and 21 sacks, which earned him the All-CIF Div. II Co-Defensive Player of the Year award. As a sophomore, he helped lead Redlands East Valley to a CIF Division 2 state championship.

In college, Phillips played two seasons at UCLA before retiring from football. He ultimately had a change of heart and then transferred to Miami. Last season, he led the Hurricanes with 15.5 tackles for loss and eight sacks.

Davis was a two-time first team All-American at Ohio State. Before that, he won Cal-Hi Sports Mr. Football award in 2016 after leading St. John Bosco to a 13-2 season and the Division I CIF state championship.

Hall was a first-team all-Mountain West selection after intercepting three passes last fall. He helped lead Rancho Cucamonga to a 12-1 record as a senior in 2016.

A two year captain at Cal, Bynum was the only Golden Bear player to start all 42 games from 2017-20. He had six career interceptions. At Corona Centennial, he led the Huskies to a Southern Section title and state championship appearance in 2015. In the state title game, De La Salle beat Corona Centennial 28-21.

Taylor was a two year starter at Washington. In 2016, Taylor was named a first-team All-Trinity League pick at cornerback as a senior at Servite.

Lenoir finished his career at Oregon with 34 consecutive starts. He intercepted a pass in all four seasons he played with the Ducks. In high school, Lenoir was named the 2016 Angelus League co-Player of the Year. Offensively that season, he carried the ball 108 times for 1,172 yards and 17 touchdowns. He also racked up 663 receiving yards and seven touchdowns. Defensively, he made 52 tackles while intercepting one pass and forcing two fumbles.

Williams was voted the 2019 Mountain West Special Teams Player of the Year. In high school, after transferring from St. Francis, Williams was named the Trinity League Co-MVP in 2015 after rushing for 1,175 yards and 14 touchdowns as a senior.

Graham was a 2020 opt out at Oregon. As a junior, he was named a second team All-Pac-12 player. He entered the 2020 season as the FBS active leader in passes defended (40) and pass breakups (32). As a senior in high school in 2016, Graham intercepted two passes, returning one for a touchdown, while making 45 tackles and breaking up seven passes. He also caught 39 passes for 490 yards and six touchdowns to help lead Rancho Cucamonga to a CIF-Southern Section Division 1 semifinal appearance.

Wilcox was a two-star recruit coming out of high school. As a senior, he had 71 total tackles, one interception, two forced fumbles and one fumble recovery for a touchdown for Roosevelt. At BYU, Wilcox finished his career with 88 tackles.