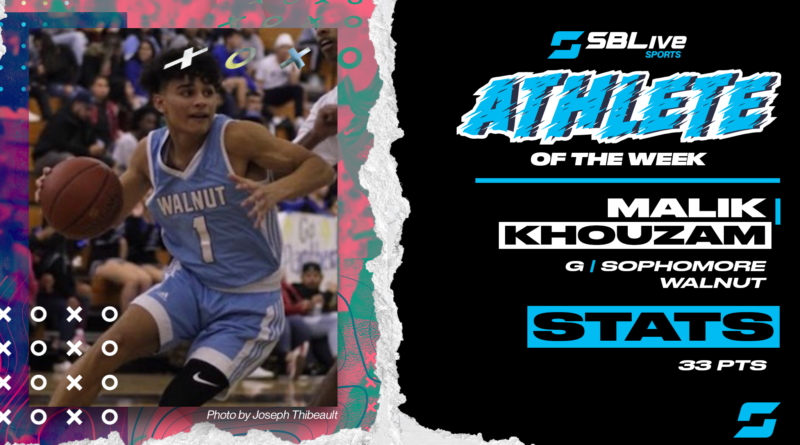 Congratulations to Walnut guard Malik Khouzam for being voted SBLive’s Southern California High School Athlete of the Week for April 19-25!

The sophomore had 33 points on 11 of 19 shooting in Friday’s loss to Los Altos.

Arthur Cuevas, Sultana G: Cuevas had 27 points including making five of six from three-point range to help the Sultans take down Apple Valley, 58-46.

Camden McCormick, Francis Parker G: The junior had a combined 45 points and 19 rebounds including shooting eight of ten from three-point range in a two-game stretch against Orange Glen and Torrey Pines last week.

Melo Sanchez, Mater Dei Catholic G: Sanchez had 33 points, five rebounds and five assists to help the Crusaders get their first win of the season against Bonita Vista.

Javier Martinez, El Camino 3B/RHP: The sophomore went 6-11 with a double last week and scored five runs to help the Wildcats to a 3-0 week.

Noah Barnes, Grossmont OF: Barnes was 5-9 with three walks, a home run, a triple, and a double to lead the Foothillers to a 3-0 week emerge as the winners of the GMC Tournament.

Charlie Saum, Thousand Oaks C: Saum had a home run, a double, and walked twice in Monday’s 10-0 win over Agoura.