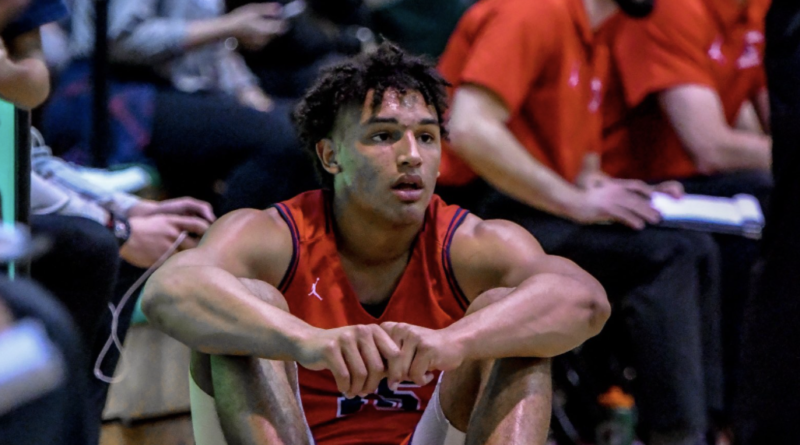 Amari Bailey is off to a hot start. He scored 28 points in the Trailblazers’ 72-59 win over St. Joseph on Saturday. Before that, he poured in a career high 29 points in a win over El Camino Real.

Etiwanda pulled off a surprising 64-60 win over Damien in their season opener and since then the Eagles have won three straight. Senior Marcus Green has emerged as a player to watch.

Harvard-Westlake has won seven games in a row. The Wolverines have great young talent led by junior Cameron Thrower and sophomore Brady Dunlap. Their two defeats came against Damien and Heritage Christian.

Ribet Academy has the potential to be the top team in the state. Look for the Frogs to push to the top of the rankings in the future.

Centennial has won nine games in a row to jump into the top ten. On Saturday, the Huskies destroyed Long Beach Poly 81-41.

Santa Margarita has been one of the surprises of the spring so far thanks to a win over St. John Bosco. Jake Blazona and Luke Murphy are key contributors. Last week, the Eagles fell to Mater Dei 51-38.

Beware of St. John Bosco’s three-headed monster of Scotty Washington, Jeremiah Nyarko and Lamaj Lewis (LMU commit). The Braves only slip up so far came against Santa Margarita, 61-58 in overtime.

2022 UCLA commit Dylan Andrews and four star big man Kijani Wright are stars, but Windward has had to deal with a COVID-19 pause and injuries this spring. Last Friday, the Wildcats lost to Crossroads 56-53.

West Ranch has a huge game on Tuesday against Valencia.

Capo Valley has wins over JSerra and Fairmont Prep.

Roosevelt is one of the best shooting teams in the Section, but shots weren’t falling when they met Centennial last week. The Mustangs lost 84-47.

Colony has won eight games in a row.

St. Anthony dropped their first game of the season to St. Bernard last week, which drops the Saints to No. 17.

UCLA signee Peyton Watson is regarded as California’s top 2021 prospect, but he didn’t play against Centennial on Saturday and Poly lost 81-41.

Benny Gealer and Kenny Manzi are a strong duo.

Wins over Windward and Beverly Hills have moved Crossroads into the Top 25.

Last week’s win over St. Anthony pushes the Vikings into the Top 25.

The Lancers have played a very challenging schedule, but last week’s victory 67-66 over Fountain Valley gets Orange Lutheran into this week’s rankings.

The Barons are one of Orange County’s top public school teams.