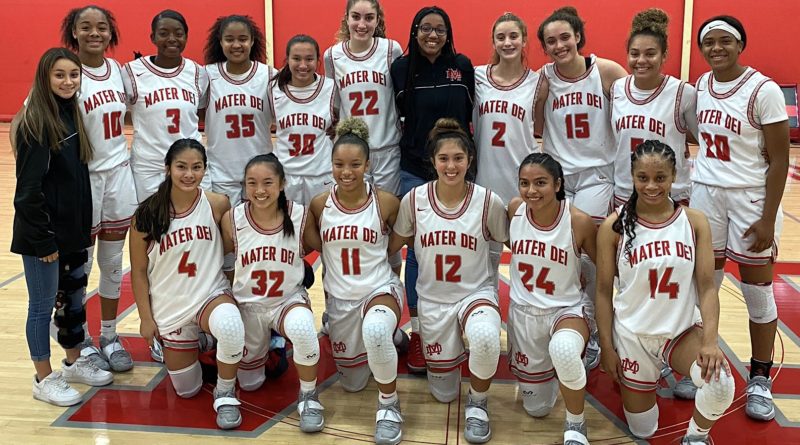 The spring 2021 California high school girls basketball season continues this week with league play either beginning or continuing for the majority of ranked teams.

SBLive’s statewide high school girls basketball rankings are compiled by SBLive California reporter Lance Smith and will be released every Monday throughout the spring 2021 season.

The Eagles already had a great win this season over Harvard-Westlake, but beating Bonita Vista by 22 on Saturday makes them a clear top-two team.

With Te-Hina Paopao off to Oregon, many thought the reigning national champion would take a major step back. Guess again: the Torreys are getting nearly 19 combined PPG from freshman Tajianna Avant-Roberts and breakout sophomore Sumayah Sugapong. LJCDS has traded double-digit victories with Bonita Vista this season.

The Barons’ only loss this season had come against LJCDS until Etiwanda beat them last week.

Cathedral doesn’t have any wins over the best of the best yet, but very few teams are capable of playing Mater Dei down to three points and Bonita Vista down to five. The Dons also have an 11-point loss from earlier in the season against Bonita Vista. They have otherwise been dominant against very good San Diego teams.

The Rams turned heads in their season-opener with a 10-point win over Archbishop Mitty.

After more than a week to think about their season-opening loss, the Monarchs responded with a nice 66-40 win over St. Ignatius.

The Warriors have only played one elite opponent this season, but they pulled out the win over Harvard-Westlake. On Wednesday they have a potential trap game against under-the-radar powerhouse North (Torrance).

H-W’s only two losses have come against Etiwanda and West by a total of seven points. The Wolverines have already beaten the likes of Sierra Canyon, Rosary Academy, Bishop Montgomery, Palisades, and Viewpoint – all by double-digits other than Rosary.

The Golden Eagles have done nothing but annihilate teams that stood no chance so far this season. This week brings an excellent chance to show what they’re made of hosting St. Mary’s (Stockton).

We’re still yet to see what Cen10 can do against another nationally elite foe, but they’ve beaten teams like Fairmont Prep, M.L. King, and Orangewood Academy with room to spare.

Salesian avenged last season’s postseason-ending loss against Bishop O’Dowd with a five-point win over the Dragons on Saturday.

Returning nearly all of last season’s core, Pinewood could make an underdog push to be the best team in NorCal this season. This Friday at Half Moon Bay could be a trap game if the Panthers aren’t ready for their third game in four days.

The Dragons came up just short against Salesian on Saturday after opening the season with a 10-point win against San Leandro.

The reigning state CIF Division 1 SoCal champion Royals have quickly put together some nice wins this season. They’ve beaten Sierra Canyon and also nearly beat Harvard-Westlake. That said, no matter how good No. 1 Mater Dei and No. 2 Etiwanda are, losing to them by a combined 77 points is concerning.

So far, the Trailblazers have respectable losses against H-W and Rosary, and otherwise have taken care of business against some nice competition.

Roosevelt got blown out by Cen10 on Thursday, but started with six straight wins before that, including beating Sonora and M.L. King by double-digits.

After a good but not dominant 2019-20 campaign, the Grizzlies are off to an outstanding start. All their losses have come against teams ranked in our top five, and they’ve beaten Mater Dei Catholic and Fairmont Prep.

All four of the Huskies’ losses were to teams ranked ahead of them, and they’ve beaten the likes of Orangewood Academy.

Some expected Orangewood to take a step back after graduating last year’s senior class, but the Spartans have already beaten Windward, Lynwood, and Long Beach Poly, and nearly beat Fairmont Prep.

Windward has already beaten four very good teams in Westlake, Bishop Montgomery, Viewpoint, and Palisades, but dropped a game Tuesday at Orangewood Academy. If last season’s CIFSS Open Division finals appearance was any indication, Windward stands to rise on this list in coming weeks more than perhaps any other team.

Poly makes another team on this list to get 50-pieced by Mater Dei, and the Jackrabbits also dropped a game against Orangewood. Other than that they’ve just been dominating league competition, but they have numerous big-name non-league foes this month to make statement wins against.

The Matadors have routed Liberty (Bakersfield), Concord, and Dougherty Valley so far. Don’t be surprised if they run the table during the regular season.

Like Miramonte, Antelope is blowing out everyone in its path, and is likely to finish the regular season undefeated.

Sage Hill hasn’t knocked off any huge names yet, but its only loss came by just three points against Sierra Canyon.