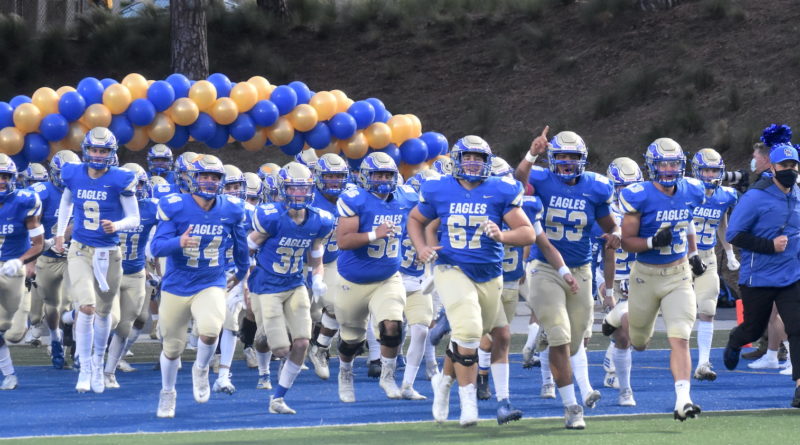 After following the Santa Margarita High School football team closely in 2019 and watching a team comprised mostly of sophomore and juniors give their all against some of the best players in the country, there wasn’t a team I was more excited to see take a leap in 2020-21.

The Eagles already had a Trinity League-caliber defense in 2019, and it figured to be strong again with 4-star DE Derek Wilkins and LBs Drew Sulick and Anthony Comestro returning. And their particularly young offense from a season ago was poised for a big leap, with 3-star QB Colt Fulton returning alongside WRs Jalen Jones, Ian Grogan, and a finally-healthy Michael Buckley, plus an improved offensive line.

It only took three games for the Eagles to turn some heads in 2021. They put up 54 points in their lone preseason game against a very good Mayfair defense, hung tough with reigning national champion St. John Bosco in the first week of Trinity League play, and pounded JSerra 42-0 behind 403 passing yards from Fulton. Their win over JSerra emphatically snapped a Trinity League losing streak dating back to 2017.

The second half of the season wasn’t as fortuitous. Orange Lutheran, a team that the Eagles were ranked above and were widely favored against, had to cancel at the last minute due to COVID-19. Then SM was beaten soundly by two of the top-ranked teams in the country, Mater Dei and Servite.

Still, that left them ranked as a top-15 team in the state by some. Throw in a preseason and a postseason, and the Eagles would’ve been in excellent shape to both achieve a major goal of finishing the season above .500, and either make the CIFSS Division 1 playoffs or be a favorite to win Division 2.

It’s disappointing they didn’t have the opportunity to play more games, but what’s clear from talking to first-year head coach Anthony Rouzier and Fulton is, SM football knows it is back.

“Being able to get that win over JSerra in emphatic fashion was incredible,” said Rouzier. “I was so just so happy for them, for the seniors to experience that joy … that’s what you do this for, and that makes it so rewarding.”

Despite losing a special senior class, they feel great about how this spring will help their longterm goal, which is bigger than competing for a Division 1 playoff berth or Division 2 playoff run. The reinvigorated culture is a big part of their confidence.

“We believe that we could be one of the best teams in the country, and we’re in the best league in the country, so why can’t we?” said Rouzier. Known solely as “Coach Rouz” to the players, he was the linebackers coach for two seasons before this one. “We want to play and compete at that level. I live for this. We’re competitive as coaches.”

“I left my job (coaching professional football) in Germany because I wanted to compete with teams like Mater Dei and Bosco. I have nothing but the most respect for those teams, but it’s the competition that brings us here and motivates us.”

Fulton said Rouzier implores his players to have a dog mentality, and that’s a good fit with a naturally scrappy team coming off a rebuilding phase.

“Coach Rouz really takes pride in us being hard workers – we have a dog mentality and aren’t afraid of anyone or anything,” said Fulton. “Put your head down and work, and it’ll take care of itself.”

“A pitbull is loyal and will jump on its owners lap, but it’s ready to fight and defend its territory at any time,” Rouzier said. “Whether we’re up or down by a 100, it’s what you do that matters. Great coaches focus on what it takes to do their best at all times, not just what’s on the scoreboard.”

“Creating or developing culture and acquiring talent are the two mainstays of a leader. Culture has to be top down, bottom up, left to right, making sure we have alignment with school administration, which we do,” said Rouzier.

“How do we really connect and vet involvement with players so they take more ownership and build peer-to-peer accountability? They don’t care how much you know until they know how much you care. For us, it’s so important for us to pour ourselves into our kids, that our number one goal as their coaches is to get invited to our kids weddings one day, and build those relationships. Which won’t happen unless they feel cared about. It’s about real care and love.”

Fulton mentioned the part about weddings before I spoke to Coach Rouz, and said that’s something that’s not lost on the players.

“We have to win their hearts to make them feel at home, and then develop their talents,” said Rouzier. “How do we create skills for them to have long lasting prosperity in life? First we have to make sure they feel welcomed.”

“Even now after the season, there are [seniors] still hanging around with coaches at school. Sometimes we gotta kick these kids out of here!” he said with a laugh.

With Fulton, Murphy, Buckley, Wilkins, and Heims among those graduating, SM faces a challenge in filling some massive shoes on both sides of the ball. The transition might be seamless, but if it’s not, this program is ready for the challenge of regathering and coming back stronger.

“Those guys leaving is difficult, but we have guys up and coming that we feel good about,” said Rouzier. “We have kids and coaches who are hungry and speaking the same language, and a great freshman class. We’re going to keep pushing the culture and win the day … perennially successful teams, they just keep going no matter who graduates or leaves.”

When asked about where he thinks SM football is headed in the next few years or so – even though he himself is about to graduate – Fulton left no doubt: “Two words: national championship.”