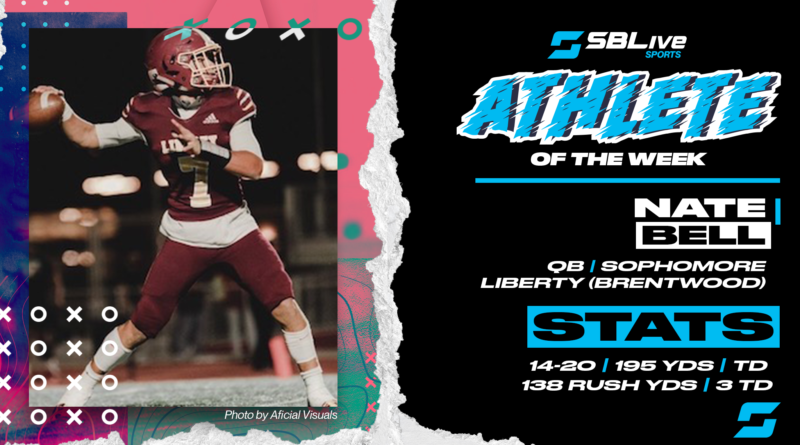 The sophomore showed off his dual-threat ability to lead Liberty to a 30-21 win over Heritage. He completed 14 of 20 passes for 195 yards and a score, and ran for 138 yards and three TDs on 16 carries as well.

Bell received 44.37% of the vote, beating out Central LB Jeremiah Shelton who finished second with 32.57%. Jesuit WR/DB Kai Santos finished third with 13.46% and Pittsburg DE Damaurye Canegan finished fourth with 7.38%. There were over 20,000 votes tallied this week!

Tyler Tremain, Folsom QB: Folsom beat Oak Ridge for the second time this season, this time by a lopsided score of 54-21. Tyler Tremain capped off his breakout season by completing 15 of 27 passes for 291 yards and five touchdowns, and running for 56 yards and a touchdown as well.

Mitch Anderson, Folsom RB: Anderson ran for 149 yards and a touchdown on just seven carries, and also had a receiving touchdown.

Dominique Lampkin, Serra (San Mateo) QB: Lampkin threw for 263 yards and two touchdowns and also ran for a touchdown in a 34-3 win over St. Ignatius that clinched an undefeated season and league title for the Padres.

Hassan Mahasin, Serra (San Mateo) RB/WR: Mahasin caught for 189 yards and a touchdown, and also ran for a touchdown.

D.J. Stevenson, Central QB: Stevenson led the Grizzlies to a 69-0 annihilation of Clovis North with 195 yards and three touchdowns passing on 12-17 completion, plus 84 yards and two TDs on the ground.

Dylan Smith, Vintage RB: Smith led the Crushers to a 35-7 win over rival Napa by rushing for 186 yards and three TDs.

Kai Santos, Jesuit WR/DB: Santos helped lead the Marauders to a 56-42 win over Vista Del Lago with 213 yards and two touchdowns receiving plus an interception on defense.

Jacob Griessel, Campolindo QB: Griessel threw for 238 yards and two touchdowns in a 44-0 rout of Miramonte on just 10 pass attempts, of which he completed eight.

Jake Ripp, Los Gatos LB: Ripp led the Wildcats’ defense with 15 tackles and two tackles for loss in a 45-7 victory over Palo Alto.

Xavier Powe, Monterey Trail DB: Powe recorded two interceptions that he returned for 91 combined yards in a 55-19 win over Antelope.

Tristan Risley, Clovis RB: Risley ran for 152 yards and four touchdowns and added a 44-yard reception in a 42-17 win against Clovis West.

Jordan Cooke, Cardinal Newman QB: Cooke threw for four touchdowns and 258 yards on 16-21 completion in a 38-14 victory against Windsor.