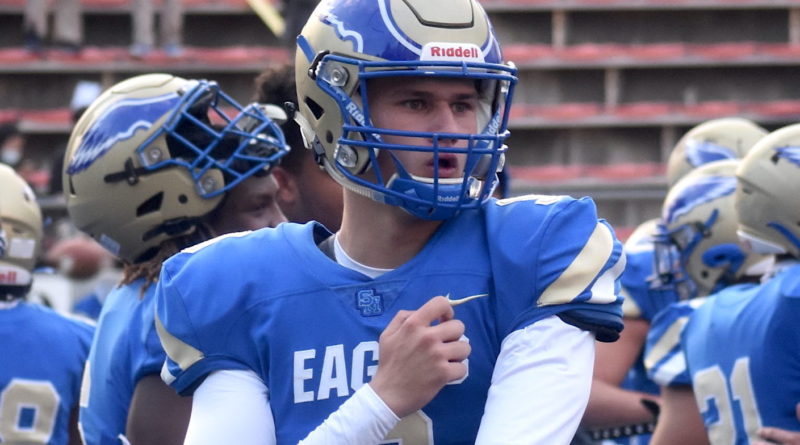 If you ask Santa Margarita 3-star quarterback Colt Fulton about his senior year of high school football being partially diminished due to the coronavirus pandemic, his positive, headstrong attitude belies the challenges he’s faced.

Just days after his high school career ended with an emotional loss to Servite, he’s more focused on his immense gratitude for having had any senior season at all – five games in which he performed at a very high level.

“I’m just grateful we did get five games, and that I’ve still been able to pursue my dream of playing college football,” said Fulton.

Still, as much hardship as California’s entire Class of 2021 has gone through, a closer look reveals that more was taken away from Fulton than most.

His journey over the past four years to becoming one of the top QBs in California at a reinvigorated Santa Margarita program has been filled with constant change. It included numerous moves, several coaching changes, and playing in the toughest league in the country during a rebuilding period for the Eagles.

A Utah native, Fulton moved to California halfway through his freshman year of high school. After a semester of high school in Utah, he decided he could best pursue playing college football at a Southern California powerhouse, and a move was simultaneously on the table for his family as a whole. Fulton transferred to Corona Centennial for the second semester of his freshman year, and stayed with a host family for several months until his parents made the move.

Despite a great relationship with Centennial’s coaching staff, Fulton saw a better potential fit at Santa Margarita, which again included a temporary stay with a host family. Then the coaching carousel began.

Santa Margarita parted ways with head coach Rich Fisher and hired Brent Vieselmeyer, who left after one year. Tim Walsh was subsequently hired in January of 2020, and had to resign in August for medical reasons. Current head coach Anthony Rouzier marked the sixth head coach of Fulton’s high school career.

During Fulton’s junior season in 2019, his only full season as a starter, SM struggled in its second straight rebuilding season and went 3-8. While the young Eagles had a lot of talent, they weren’t up to the rigors of the Trinity League, and went winless in league play for the second season in a row. Fulton showed significant promise, and his best effort came in their playoff game against eventual CIF 1-AA state finalist Sierra Canyon. He threw for 274 yards and two touchdowns with a torn right labrum against an elite defense.

After the season he netted offers from Bucknell, Yale, and Northern Colorado, but he was set to really show what he could do in his senior season.

All signs indicate that a full 2020-2021 season would’ve resulted in the immense payoff Fulton and SM were building towards. While a 2-3 record won’t jump out to anyone who doesn’t know Trinity League football, the best Eagles team in years was poised for a winning season, and likely a CIFSS Division 1 playoff appearance or major Division 2 playoff run. The five games they did play included a 42-0 blowout of JSerra in which Fulton threw for 403 yards, and a strong showing in a loss against reigning national champion St. John Bosco in which he threw for four touchdowns.

Passing for 16 touchdowns and 1,292 yards to only four interceptions in five games that included Bosco, Mater Dei, and Servite – according to some, the three top-ranked teams in the country – is impressive. Every year, more highly-touted prospects get walloped in that gauntlet.

To go through everything he has on his football journey and then miss so much of his senior season due to COVID-19, many in his shoes would be fixated on their bad luck. But not Fulton.

“I don’t really look at it like that,” said Fulton. “God closes certain doors for you and opens other ones when the time is right, and you can’t always see why at the time. What I think about more is how I’m so grateful that we got to play this season at all.”

What the pandemic took from him is not isolated to football. In November, Fulton lost both his uncle and his grandfather to COVID-19 within the span of 10 days.

“It was challenging, but I used it as fuel and motivation to do everything in my power to perform and do well for them,” said Fulton. “And for my parents, because it was a tough situation for them too.”

Fulton’s growth as a player from his junior season to this year was significant. Extrapolating his play across a full season with a pre-league slate and postseason would’ve given him an excellent chance to reel in some Power-5 offers. Highly respected football scout and coach Keith Miller recently called Fulton the top uncommitted senior quarterback in the country, and there’s an objective argument to be made that Fulton is just that.

Of the handful of higher-rated uncommitted QBs in the C/O 2021 on 247Sports, almost all are ranked only marginally above Fulton, and the growth he showed from last season in just five games was more than a typical year’s jump in terms of development. As good as he is now, he’s still improving at a rapid rate.

At the top of Fulton’s mind is his gratitude that he’s going to play college ball. But he is still looking for his first FBS offer, and in a season when many schools are still recruiting late in the spring, his coaches are helping connect him and put his film out there. He’s received interest from the likes of Cal, Utah, Missouri, Fresno State, and Washington State.

For now, he will continue to focus on getting better and savoring the good memories he’s had at Santa Margarita.

“With COVID, all the coaching changes, this senior class has been through a lot in the last four years. All of it taught us a lot, and not a lot of people have gone through those experiences … In that way, we wouldn’t change a thing.”