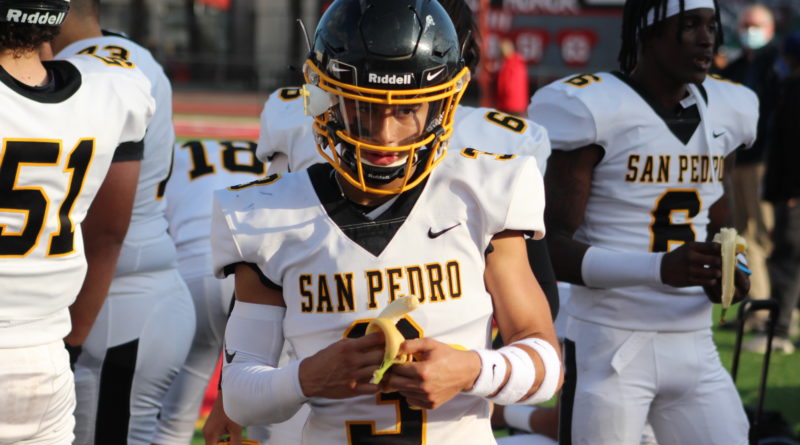 WILMINGTON — Sometimes the world of sports can be cruel. The San Pedro football team had their fall season postponed due to COVID-19. Then they waited around on LAUSD while Southern Section football programs got the green light to play games in early March. When the Pirates were finally cleared to kick off two weeks ago, Dorsey forfeited. Then a week later, Narbonne had a COVID-19 positive and couldn’t play.

Desperate to just get a game in, San Pedro took the field for the first time on Friday and the Pirates took out all of their pent up frustration on Marine League rival Banning, winning 64-19.

Junior quarterback Aidan Jackson tossed four touchdown passes in his varsity football debut for the Pirates. Junior Robert Sarmiento caught one of the touchdowns, rushed for a touchdown and returned a punt for a score in the win as well.

San Pedro was dominant in all three phases of the game. Below are three takeaways from their victory.

Two weeks ago Jackson was the backup. Then senior Dylan Kordic decided to play baseball and miss the last two weeks of the high school football season, which opened the door for Jackson to start. And on Friday, he took full advantage of his opportunity.

“He stepped up big time tonight,” Miller said. “The future is looking bright for him. We’re blessed and lucky to have him…You can see the light bulb starting to go on with him. He’s thinking this is my job to earn, this is my job to keep. He’s starting to get more poised and more confident and the kids are going to have trust in him now.”

San Pedro led 44-13 at halftime. Johnson, who looks more like a defensive end than a QB, was 12 of 14 passing for 198 yards and three touchdowns at the break. He’s a player to watch next fall.

The Pirates only have eight seniors graduating this spring and on Friday, they got almost all of their scoring contributions from underclassmen.

“This is like spring ball in pads,” Miller said. “The future is looking good if we can keep all of these kids together.”

In addition to Jackson and Sarmiento, sophomore linebacker Makani Konopka had two pick-sixes in the game. Junior wideout Chris Nixon caught two touchdowns and junior defensive back Kejuan Bullard returned a kickoff for a score.

The three best teams in the City Section this spring are Birmingham, Venice and San Pedro. Looking to next season, both Birmingham and Venice will lose their quarterbacks and other top skill position players to graduation. San Pedro won’t have that issue. The Pirates should be No. 1 in August.

NIGHT TO FORGET FOR BANNING

Star 2022 Banning running back Jakob Galloway missed Friday’s game with a knee injury, but even he couldn’t have closed the gap enough for the Pilots to compete with San Pedro in this game. The Pilots really struggled with their biggest issues coming on special teams and in the passing game.

The good news for Banning is that they only have eight seniors as well and will return all of their stars in the fall. Head coach Raymond Grajeda said he’s treating this abbreviated season as a more involved spring practice that will lead up to the fall, where the Pilots hope to compete for a City title.

Banning has won two games this spring and they’re rotating two freshmen at quarterback in Robert Guerrero and Ryan Deangelis. As those two improve and Galloway gets healthy, the Pilots’ offense will look better.

The Pilots didn’t play well on Friday, but expect them to look better in a few months.