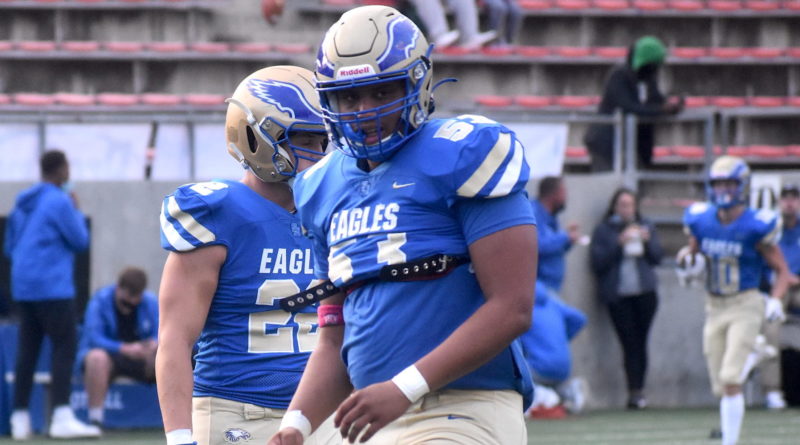 With the spring 2021 California high school football season coming to a close, SBLive continues to take a look at the top football players in the state, position by position.

After taking an in-depth look at the best linebackers in the state, we’re now breaking down the state’s top defensive linemen.

Since this is not a recruiting ranking, players’ national rankings or college offers were not primary criteria, but were taken into account – mainly for players who haven’t received a full opportunity to shine at the varsity level yet. Performances in club football or at camps were not taken into consideration. The rankings were compiled by SBLive reporter Bodie DeSilva.

Class of 2021 defensive linemen who have decided to graduate and enroll early in college were not considered in these rankings.

Spivey collected 28 tackles and five sacks over four games during his junior season for the Indians.

The six-foot-five McQuigg finished with 16 tackles during the spring season. He’s committed to UNLV as a preferred walk on.

O’Gorman burst onto the scene with 22 tackles, seven sacks, and two forced fumbles during the spring season.

Bouda had a strong to his high school career with 5.5 sacks during the spring season. He signed with Cal Poly.

Helu was a playmaker up the middle, collecting 35 tackles and four sacks combined during his sophomore and junior seasons. He signed with New Mexico State after picking up 11 scholarship offers from schools across the country.

Sanders made 19 tackles and three sacks during the shortened spring season. He signed with San Jose State in December.

A four-year varsity player for the Saints, Gaeta totaled 104 tackles, 10.5 sacks and six forced fumbles during his career. He’s signed with the University of San Diego.

Narayan appeared in varsity games during each of his four seasons with the Monarchs, making 71 tackles and 11.5 sacks. He signed with Navy.

Guzman has been a game wrecker for the Panthers with 15 sacks and three forced fumbles in only four games this spring.

Gonebure has been a difference make on both sides of the ball throughout his high school career and finished with 116 and 8.5 sacks combined during his sophomore and junior seasons. He’s signed with San Diego State.

Jacks has 60 tackles and 2.5 sacks over the past two seasons. He’s committed to Fresno State.

Cooper played a big role in the Conquistador’s 2019 CIF run, registering five tackles and three sacks in the championship game. He’s signed with the University of San Diego.

Hassanein didn’t pick up football until 2019 after moving from Egypt. He’s signed with Boise State.

Ostlund compiled 31 tackles, 3.5 sacks, and a forced fumble during his shortened senior season.

McKenzie had a big February, adding offers from USC and Texas among several others.

Malaki-Donaldson had 19 tackles and a sack in five games during the spring season. He’s surpassed the double digit scholarship mark.

Tuioti’s 61 tackles, five sacks, and two forced fumbles during his junior season earned him several offers before deciding to sign with Army.

Shaw has been a dominant force for the Rams over the past two seasons. He racked up 30 tackles and nine sacks in only four games this season.

White had eight sacks during his sophomore season and added five more this spring. Arizona is one of several offers that have come in.

Scott entered his junior season having racked up 60 tackles and ten sacks. Arizona State and Utah are among his five offers so far.

Tobin has been a playmaker on defense for the Wolverines, racking up 93 tackles and 13 sacks during his sophomore and junior seasons. He signed with Duke in December.

Gusta closed out his senior season with 34 tackles and four sacks. He’s signed with Washington State.

Williams is a run stuffer up the middle at 6-foot-2 and 325 pounds. He committed to Cal in January.

Satele has played in 29 games for the Braves during his first three seasons. He’s totaled 126 tackles and ten sacks during that time.

Graham is one of several talented class of 2022 prospects for a Servite team that is on the rise. His recent offers have come from Army and UNLV.

The six-foot-five Rowell is one of the top rising prospects on the West Coast with recent offers from Oregon, Michigan, and Stanford.

Larry had an excellent spring season, finishing with 34 tackles and seven sacks in only six games.

Migao had 49 tackles and seven sacks during five games this spring. He’s signed with BYU alongside his twin brother Elia.

Kanu has been one the country’s hottest recruits since moving in from Germany. Clemson, Ohio State, and Texas are among his many offers.

Burrell had 14 tackles and half a sack during the spring season for the Braves. Eight schools from the Pac-12 have already extended offers.

Moi helped San Diego’s top team record shutouts in four of their five spring games. USC, Stanford, and Oregon are among his many offers.

Heims had 18 tackles and a sack over his five games during the spring season for a loaded Santa Margarita defensive line. He’s signed with Washington.

Roney causes havoc up the middle and requires a double team. USC, Oregon, and Miami are among the double digit offers that have arrived.

The three-sport standout is a load to deal with at six-foot-seven and 280 pounds. His junior season included 46 tackles and nine sacks. He’s signed with Nebraska.

Halton split time at running back and defensive line this season after injuries left the Saints shorthanded. He heads into his senior season with 89 tackles, eight sacks, and four forced fumbles on his resume. He committed to Oregon in January over a group that included USC, Penn State, Nebraska, and Arizona State.