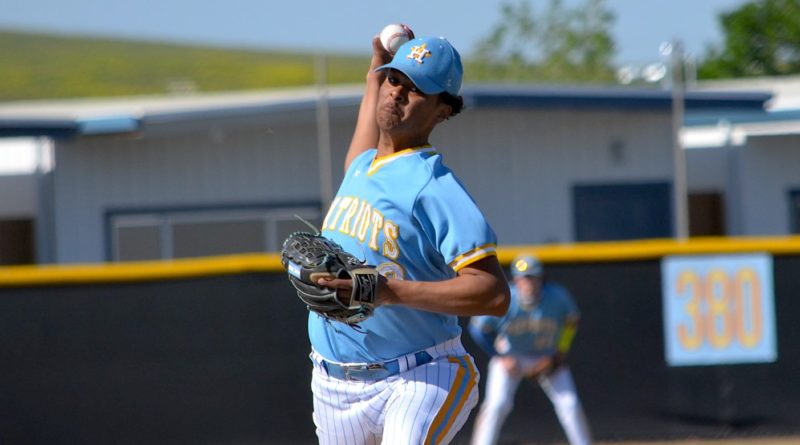 The Bay Area baseball schedule is all over the place this season. The West Alameda Contra Costa League is now done with its season, while other leagues are just starting this week and others like the East Bay are fortunate enough to play a full season. The Central Coast Section will have playoffs, but the North Coast Section will not. This makes putting together a Top 10 really tough, but here we go.

Here’s a look at the Top 10 Bay Area baseball teams as of April 23:

The Patriots avenged their only loss of the season to Pittsburg two days after the one-run loss. Other than that the Patriots are perfect. Gavin Tonkel has 14 hits for Heritage with a .341 average, four doubles and two triples. The Pats are led on the mound by senior Cristian Machado who has three wins this season with a 1.68 ERA and 18 strikeouts.

This team is full of talent, winning four in a row since their only loss to Los Gatos two weeks ago. The West Catholic teams are only playing against teams in their area so the Warriors will see Mitty, St. Francis and Bellarmine three times each before the playoffs. The Warriors are hitting .390 as a team with senior Trevor Haskins leading the group with 14 hits, batting .519.

Some impressive early wins have Saint Francis at No. 3. The Lancers do have two close losses, but they also have wins over Los Gatos, Carlmont and Bellarmine. The Lancers are winning with pitching and defense with junior Owen Swanson off to a great start.

The Cats are loaded with talent and are battling through a very tough schedule. The Cats have played five quality teams to start the season with a win over Valley Christian and a 10-inning loss to Saint Francis. The Cats are hitting .336 as a team, but expect Tommy Splaine to heat up as the season goes on. Tommy’s cousin Michael Splaine is hitting an impressive .400.

The Grizzlies are red-hot, winning their last eight games. Roaul Fabian has 20 hits in 40 at bats for an impressive .500 average. The pitching staff is led by junior Nic Bronzini who is 3-1 with a 1.64 ERA.

The Spartans have four losses after falling twice to San Ramon Valley this week, but they bounced back with a 19-7 win over the Wolves on Friday.

The Padres play in the northern end of the West Catholic league where the competition is not quite as tough. Still, the Padres are collecting wins including two this week against Saint Ignatius. DJ Ghiorso has 11 hits this season and is batting .318 to lead the padres. Senior Rahmi Ismael has two wins on the mound for Serra with a 1.17 ERA.

The Acorns Landon Stump is dominating every team he faces. The sophomore fire-baller is 3-0 with a 0.39 era and 22 strikeouts. Fellow sophomore Aiden Keenan gives the Acorns an incredible one-two punch on the mound. The team doesn’t hit extremely well, but they find ways to score with 32 runs in five games.

I saw Clayton Valley this week and was very impressed with the quality of this team. The Ugly Eagles are solid on defense and got a great start from Mason Oakley who pitched a complete game three-hitter. The Uglies swept Campolindo this week.

No shame in the Vikings two losses to Los Gatos and Valley Christian. The Vikings are deserving of top-10 recognition with a good hitting all through the roster. Senior Aiden Berger is hitting .353 for the Vikings who hit .300 as a team. Junior Josh Donaker has two wins for Paly this season.