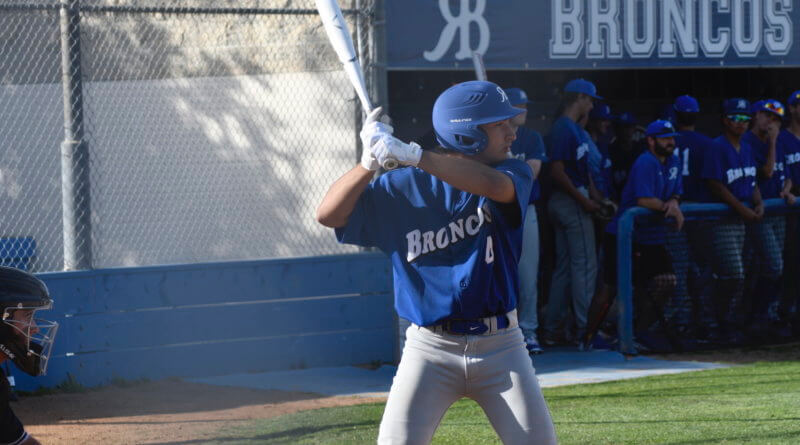 The 2021 high school baseball season is a month old for the majority of teams in California. In the CIF San Diego Section, Rancho Bernardo went 3-0 last week, beating three quality opponents to help the Broncos earn the No. 1 slot in our first statewide rankings of the season.

Foothill has been on fire for the last three weeks, propelling them to No. 5 in the initial rankings. They’ll play four times during the upcoming week.

SBLive’s statewide high school baseball rankings are compiled by SBLive California reporter Bodie DeSilva and will be released every Monday throughout the season.

The Broncos beat their three opponents by a combined 25 runs last week. Long Beach State-signee Peyton Schulze is hitting .535 with 16 runs batted in so far.

Junior pitcher Louis Gonzalez has struck out 22 batters and allowed only one earned run in 19.1 innings.

Foothill is scoring over 13 runs per games during their seven game winning streak.

The Eagles beat Dana Hills on Saturday to avenge their early season loss against the Dolphins.

The Cardinals have outscored their opponents by 112 runs over their first eight games.

The Knights are averaging nearly ten runs per game.

The Padres have scored seven runs or more in each of their six games so far.

Since losing to Bullard, Buchanan has scored 45 runs in a three-game span.

The Bulldogs have won each of their nine games by four runs or more. Junior Troy McCain is hitting .484 with seven doubles so far.

San Joaquin Memorial has lost twice this season, both of them coming against Buchanan.

The Mavericks have scored 70 runs more than their opponents and are hitting .365 as a team.

The Highlanders have only allowed nine runs over the past six games during their undefeated start.

Sophomore Anthony Jones is hitting .684 in his first seven games of the season.

The Broncos will host Bullard this week, looking for revenge after last week’s 9-0 loss.

The Wolves won both games last week, each by one run. Sophomore Jase Evangelista is hitting .433 with two home runs so far.

The Foothillers have been crushing the ball in their first 13 games. Senior Isaiah Gomez is hitting .548 with five home runs so far.

The Wolfpack bounced back with a 10-1 win on Saturday after two consecutive losses. They begin a three-game series against Jesuit this week.

The Monarchs are allowing less than three runs per game during their first 11 games.

The Wolverines won two out of three games against St. Francis last week and begin a series against Loyola this week.