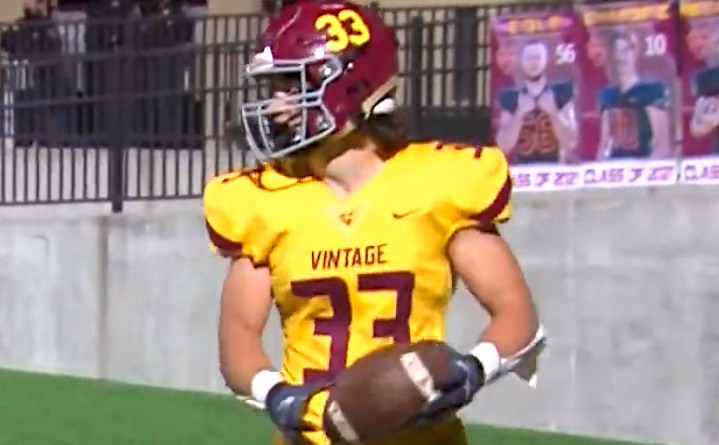 Week 6 of Northern California high school football featured dominant performances from several familiar faces, and some from new ones.

Here’s a quick look at some of the top stars and individual performances from the sixth week of games, which was the final week of the season in most of the state.

Smith led the Crushers to a 35-7 win over rival Napa by rushing for 186 yards and three TDs.

Folsom beat Oak Ridge for the second time this season, this time by a lopsided score of 54-21. Tyler Tremain capped off his breakout season by completing 15 of 27 passes for 291 yards and five touchdowns, and running for 56 yards and a touchdown as well.

Anderson ran for 149 yards and a touchdown on just seven carries, and also had a receiving touchdown.

Lampkin threw for 263 yards and two touchdowns and also ran for a touchdown in a 34-3 win over St. Ignatius that clinched an undefeated season and league title for the Padres.

Mahasin caught for 189 yards and a touchdown, and also ran for a touchdown.

Stevenson led the Grizzlies to a 69-0 annihilation of Clovis North with 195 yards and three touchdowns passing on 12-17 completion, plus 84 yards and two TDs on the ground.

Bimb led the Huskies’ defense with two interceptions and 10 tackles in the victory.

Huchingson finished his high school career with 290 passing yards, three touchdown passes, and 46 rushing yards in a 23-22 win over California. Evan Malmquist and Dante Montgomery were his top receivers.

Quigley led the Wolves to a 28-21 win over Monte Vista by passing for 347 yards and three touchdowns on 21-32 completion. JP Murphy, Za’Darion Nardi, and Caden Ridley all had major contributions on offense.

Bell showed off his dual-threat ability to lead Liberty to a 30-21 win over Heritage. He completed 14 of 20 passes for 195 yards and a score, and ran for 138 yards and three TDs on 16 carries as well.

Santos helped lead the Marauders to a 56-42 win over Vista Del Lago with 213 yards and two touchdowns receiving plus an interception on defense.

VDL didn’t pull out the win, but Menezes ended his high school career with a performance of 186 rushing yards and 87 receiving yards.

Adediron helped lead Deer Valley to a 34-32 upset of Freedom with 273 yards and three touchdowns passing plus 40 rushing yards.

Parker led the Wolverines’ defense with 15 tackles (one for loss).

Griessel threw for 238 yards and two touchdowns in a 44-0 rout of Miramonte on just 10 pass attempts, of which he completed eight.

Ripp led the Wildcats’ defense with 15 tackles and two tackles for loss in a 45-7 victory over Palo Alto.

Powe recorded two interceptions that he returned for 91 combined yards in a 55-19 win over Antelope.

Hornbeak capped off his high school career with 204 yards and five touchdowns rushing in a 57-20 win over Edison (Fresno).

Pearson ran for 149 yards and two touchdowns in the Pirates’ win.

Risley ran for 152 yards and four touchdowns and added a 44-yard reception in a 42-17 win against Clovis West.

Cooke threw for four touchdowns and 258 yards on 16-21 completion in a 38-14 victory against Windsor.

The Washington State signee caught for 166 yards and two touchdowns.