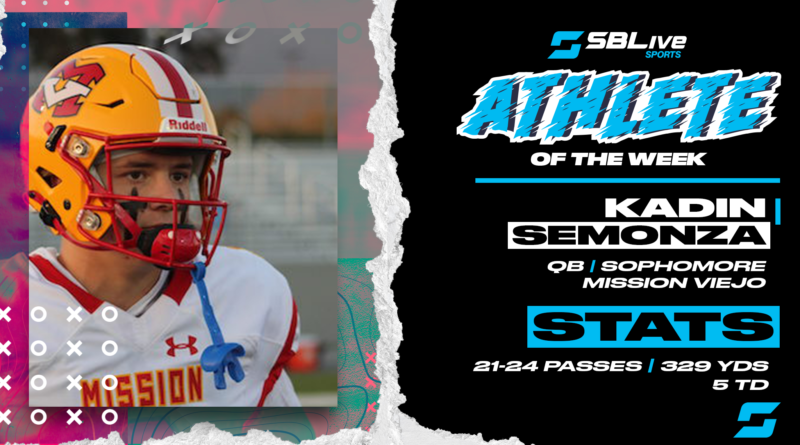 The sophomore was efficient on Friday, completing 21 of 24 passes for 329 yards and five touchdowns in the 49-14 win over San Juan Hills.

Semonza received 34.06% of the vote, beating out Mission Viejo WR Mikey Matthews who finished second with 21.8%. El Dorado’s Jackson Smith finished third with 11.42% and Steele Canyon RB Major Givens finished fourth with 8.76%. There were over 59,000 votes tallied this week!

Kyle Crum, Norco QB: Crum was 15 of 21 passing for 284 yards and three touchdowns in Thursday’s win over Riverside King. He also added a rushing touchdown in the 42-0 victory.

Sam Vaulton, Venice QB: Vaulton had 224 passing yards, four passing touchdowns and one rushing touchdown in his debut for the Gondoliers.

Manny Robert, Hillcrest RB: Robert had over 100 yards rushing and receiving on Thursday. He finished with 259 total yards and three total touchdowns against Ramona.

Dominic Garcia, Norte Vista QB: Garcia was five of seven passing on Friday night, but completed all five passes for touchdowns. He finished with 190 passing yards.

Trevor Lagarde, North Torrance QB: Lagarde had a huge outing on Friday, completing 14 of 23 passes for 296 yards and eight touchdowns.

Jawan Howard, Silverado RB: Howard rushed for 173 yards, averaging six yards per carry, and had a touchdown in Friday’s loss to Hesperia.

Elijah Wash, Rancho Cucamonga WR/DB: Wash caught five passes for 72 yards and two touchdowns and also had an interception in the win over Chino Hills.

Jaheem Williams, Montgomery DB: Williams caught a 29-yard touchdown against Chula Vista and returned both of his interceptions for touchdowns against the Spartans.

Adrien Chargualaf, Steele Canyon DB: Chargualaf had ten tackles, a sack, and an interception against Grossmont on Friday.

Clash Orsborn, Mission Bay QB: Orsborn threw for 349 yards and had three passing touchdowns to help the Buccaneers record their first win of the season.