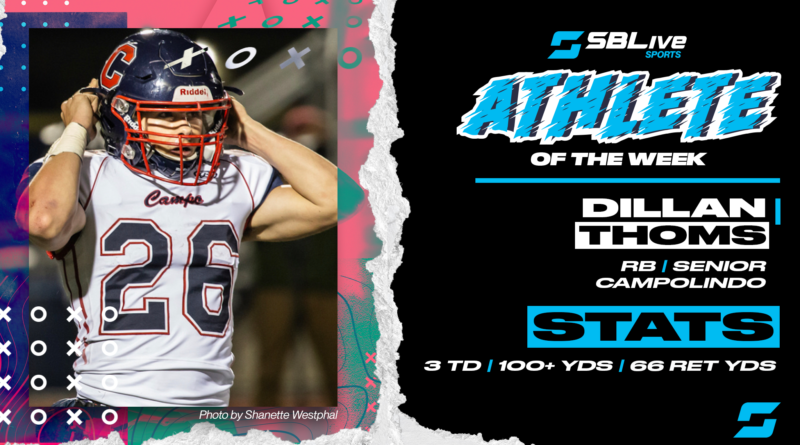 Congratulations to Campolindo running back Dillan Thoms for being voted SBLive’s Northern California High School Athlete of the Week for April 5-11!

The senior ran for three touchdowns and over 100 yards, and also returned three kickoffs for 66 yards in a 38-28 win over Las Lomas.

Thoms received 50.57% of the vote, beating out Liberty (Brentwood) WR Leo Reichhold who finished second with 37.21%. Monterey Trail LB Nekhi Broadway finished third with 6.79% and Selma QB Joey Ramirez finished fourth with 1.3%. There were over 18,000 votes tallied this week!

Jaden Rashada, Pittsburg QB: Rashada threw for four touchdowns in a 67-8 victory over Deer Valley, including three touchdowns and 138 yards in the first half alone. He did that splitting snaps with another college prospect under center, Eli Brickhandler.

Tyler Tremain, Folsom QB: Tremain had yet another five-touchdown performance in a win this season, this time in a 41-14 win over Lincoln.

DJ Stevenson, Central QB: Stevenson threw for 230 yards and two touchdowns, and rushed for 76 yards more in a 38-13 win against Clovis West.

Chris Lands, Monterey Trail RB/DB: Lands not only ran for a touchdown and over 100 yards, but also recorded eight tackles and a tackle for loss on defense.

Jake Ripp, Los Gatos LB: Ripp recorded a mind-numbing 23 tackles (one for loss) in a 20-19 win against Wilcox.

Quinn Merritt, Los Gatos WR/DB: Merritt caught for 92 yards and a touchdown, and recorded an interception in the victory.

Jeremiah Earby, Menlo-Atherton WR/DB: Earby had a touchdown catch and a pick-six of 72 yards each in a 50-7 win over Terra Nova.

Jordan Hornbeak, San Joaquin Memorial RB: Hornbeak ran for 165 yards and a touchdown, and added two catches for 41 yards and a TD in a 29-2 win against Bullard.

Lyon Colon, Manteca RB: Colon exploded for 301 yards and four touchdowns on the ground to lead the Buffaloes over Oakdale 26-23.

Jacob Griessel, Campolindo QB: Griessel threw for 242 yards, two touchdowns, and no interceptions in a 38-28 win over Las Lomas.

Maxwell Weaver, Campolindo WR: Weaver caught for 146 yards and a touchdown, and also had a 64-yard carry.

Michael Ingrassia, Marin Catholic QB: Ingrassia threw for 221 yards and three touchdowns and ran for 76 yards in a 45-10 rout of Central Catholic.

Anthony Grigsby Jr., Cosumnes Oaks QB: Grigsby led the Wolfpack to a 31-16 win over Davis by throwing for four touchdowns and a pair of two-point conversions.

Darian Leon-Guerrero, Vacaville RB: Leon-Guerrero exploded for 338 yards of total offense, including 298 yards rushing, in a 63-8 blowout of Rodriguez.

Nate Bell, Liberty (Brentwood) QB: Bell went off for 368 yards on a whopping 29-34 completion in 21-14 win against Freedom. He accounted for all of the Lions’ touchdowns with two touchdowns passes and a rushing score.

Joey Ramirez, Selma QB: Ramirez attempted just 10 passes in a 50-7 rout of Dinuba, but he completed seven of them for 215 yards and three touchdowns. Aaron Blancas was his top target with 129 receiving yards.