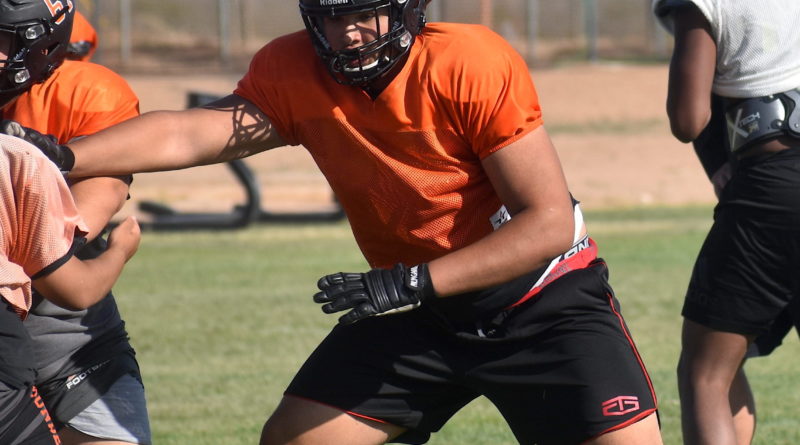 APPLE VALLEY, CALIF. – Raymond Pulido is rapidly emerging as a national recruit just a few starts into his high school varsity football career, and nobody around him is surprised.

With extraordinary physical gifts, it doesn’t take a professional football scout to see why the class of 2023 Apple Valley (Southern California) left tackle is a special prospect, and why Maryland offered him in January before he was a full-time high school starter. Watch some film on his dominant sophomore campaign and it’s easy to see why Arizona recently followed suit.

Pulido stepped onto Apple Valley’s campus in the fall of 2019 upwards of 6-foot-5 and 300 pounds, and has not stopped growing. He was 6-6, 320 by the time his freshman football season ended, and now he’s 6-7 and still likely growing. Pulido was most recently listed at 340 pounds, but he’s getting bigger and stronger by the month.

What makes Pulido a rare specimen is not just the fact that he’s enormous for a 16-year-old, but he also has a lower body fat percentage than nearly any O-lineman you’ll see of that size. He also possesses grown man’s strength and a well-proportioned build as a high school underclassman. And he has a naturally wide frame that can fully support that much weight, plus burly limbs and good core strength, so he can maintain mobility and coordination.

With Pulido’s size, mobility, strong work ethic and positive attitude, Meras and the other coaches knew almost immediately that he was going to be a big-time prospect. Pulido was receptive when the varsity coaches said they wanted to take him as a freshman, even though he wouldn’t get nearly as many reps as he would on JV or frosh. Seeing him as a clear building block, the move was made to patiently prepare him to burst onto the scene from the start of his sophomore season onward.

It has paid off. Pulido is rapidly establishing himself as one of the Inland Empire’s next premier candidates to explode as a national recruit. Pulido is a beast at offensive tackle, although he still sometimes plays as an interior defensive lineman in goal-line situations and could be a Power-5 caliber nose guard.

While his natural gifts play a major part, Pulido is able to move like a basketball player at his size because he is one by trade, and can dunk from a near-standstill. It was basketball, not football, that Pulido grew up favoring and focusing on.

“I play a lot of basketball,” said Pulido, who played on the Sun Devils’ varsity basketball team as a freshman. “Basketball is my free sport; it’s what I enjoy doing with my free time. I try to practice as much as possible and it’s helped me (athletically) so much.”

“I try to dominate (in the post) as much as I can. When I was younger, Shaq was my go-to guy. I just loved seeing him dominate on the court, it really inspired me.”

Pulido says playing college basketball is something he’s definitely interested in, but he doesn’t see it as something to directly pursue. If he had the choice in front of him to play D-I basketball instead of football?

“Maybe,” said Pulido. “It would be a dream, but I don’t know because I think I can achieve more in football.”

Pulido started playing youth football in seventh grade at his father’s suggestion. Robert Pulido saw the potential in his son to be a great football player before Raymond ever stepped on the gridiron.

“I knew when he was seven or eight,” said Robert Pulido. “I kept him in soccer, baseball, basketball until he turned 10 … he asked me at 12 to join the Victor Valley Outlaws where I was the line coach. He was definitely better than most.”

Robert’s coaching helped give Raymond a head start, and once he got to high school he was able to get into the main rotation by late in his freshman season.

While Pulido is already making waves for his measurables, he feels a sense of urgency to keep improving as a physical specimen as quickly as possible.

“I really just want to get stronger and faster,” said Pulido. “I want to work on my explosion more. I think that’s what I’m lacking in right now. If I can one day compete at a really high level, I’ll do whatever it takes, anything really.”

Other than his offers from Arizona and Maryland, Pulido hasn’t yet focused in on getting in touch with other schools. But he looks forward to crossing that bridge soon, especially around September when the NCAA restrictions on recruiting juniors loosen.

Pulido’s college decision will be a football decision like with most other major prospects, but he says academics will definitely be a major part of his recruiting picture. And having grown up watching much more basketball than college football, he says he has a lot to learn about the college football landscape overall before he gets to that point. With a strong chance to become a widely sought-after national recruit, he might end up with a laundry list of major D-I programs looking to show him what they have to offer in just a few months.

But for now, Pulido is focused on doing everything he can to grow, improve, and stay in the moment.

“The key for my personal success is work hard and keep a good mentality,” said Pulido. “It can all slip pretty quickly if you let it get to your head.”