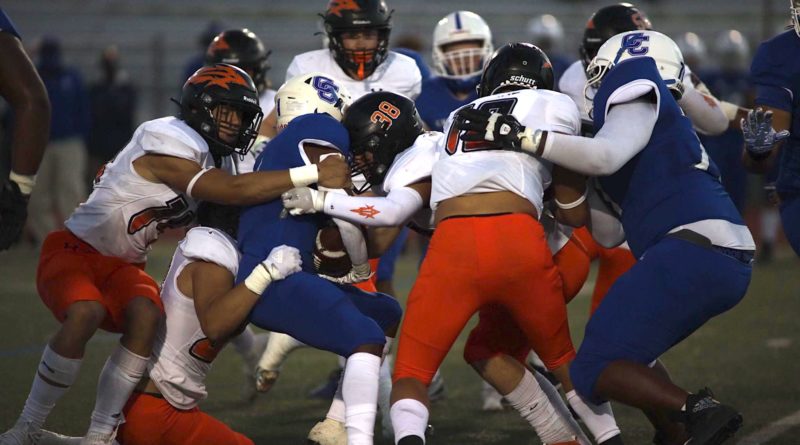 Apple Valley defeated Culver City 49-42 in non-league play on Friday to finish the season 5-0 and pick up one of its higher-profile wins in recent program history.

Before the final week of the 2020-2021 Southern Section football season, Apple Valley had already swept the Mojave River League by a whopping combined score of 179-21, and Culver City won a league title in undefeated fashion as well in its first season in the Bay League. Both teams had an opening this past week and scheduled what was sure to be a fun duel between two of SoCal’s premier passers, 4-star junior Jayden Denegal for Apple Valley and 3-star senior Zevi Eckhaus for Culver City.

Apple Valley knew that they were facing a big-time passing game, and Culver City’s offensive firepower lived up to what the Sun Devils staff expected.

“They could throw the heck out of the ball. They’re a good team with a lot of talent at wide receiver and that QB was good,” said AVHS assistant coach and offensive coordinator Robert Meras.

But it was Denegal and the Sun Devils’ offense that stole the show when all was said and done. Denegal completed 13 of 17 passes for 155 yards and a touchdown in the Sun Devils’ victory, and continued his breakout junior year in terms of his running game with 10 carries for 50 yards and four touchdowns. Damian Guillen had one of his best varsity performances with 15 carries for 116 yards, and Kaleb Most ran for 63 yards as well.

Apple Valley has been on a sharp rise for six seasons in a row, however, scheduling non-league games against big-name programs had been a challenge until very recently. This season, the Sun Devils were set to play the likes of Rancho Cucamonga in their pre-league slate, and would’ve been in good shape to make a playoff birth in a fairly high division had this season not been heavily impacted by the pandemic. Culver City is just two seasons removed from a division title and state finals birth, and one season removed from a CIFSS Division 5 semifinals appearance. So, this win is particularly significant for Apple Valley as it demonstrates the type of challenges the program is ready for to keep rising on the Southern Section map.

This fall, the Sun Devils will open up against Rancho Cucamonga and Murrieta Valley, and have their sights set on a potentially program-defining playoff run. So while this impressive win over a great Centaurs team isn’t directly consequential besides ending the season in style, it’s likely a brief taste of what’s to come for them next season and beyond.