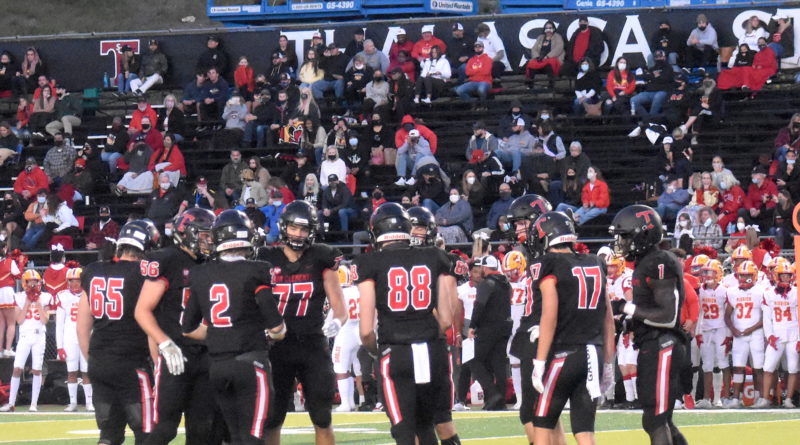 SAN CLEMENTE– In a clash between two perennial Orange County powerhouses with a fierce rivalry on Friday, the defense was so strong that there weren’t a lot of fireworks or offensive highlights to speak of. Yet when push came to shove and the game wound down, the South Coast League championship game between Mission Viejo and San Clemente ended up a thriller.

San Clemente rallied late in the second half and won the game as time ran out in the fourth quarter, leading to an exciting finish and emotional postgame celebration. Here are five takeaways from the game.

There’s a reason that two offenses with multiple national recruits at skill positions were held to a total of three scores. And the reason wasn’t bad offense, it was that this game was a defensive clinic.

Mission Viejo was able to hold the Tritons scoreless until under a minute left in the third quarter. A very solid San Clemente passing game featuring QB Lachlan Van Rosmalen and WR/TE Bentley Redden was almost a non-factor in this game thanks to blanket coverage from MV’s secondary, which included an interception by Ruben Lopez. On top of that, Mission Viejo’s defense was still loaded up enough up front to end or disrupt a lot of plays at the line of scrimmage.

The Tritons were even more dominant on defense, and shut MV out for the whole second half. Their back four did a spotless job preventing big plays, save for one long touchdown catch by Mikey Matthews. But it was SC’s front seven that stole the show, neutralizing an outstanding Mission Viejo running game and sacking 3-star QB Kadin Samonza several times. Cole Robertson and Kanious Vaughn led the charge but as usual, it was a dominant group effort for San Clemente’s defense that went 11 guys deep.

The lone exception to Mission Viejo’s stifling defense? As many times as they sniffed out a handoff to James Bohls and hit him almost immediately, they consistently struggled to bring him down. The Arizona commit ran for 142 yards yards and a touchdown on 22 carries, plus a couple receptions including a key snag through heavy coverage that set up his rushing touchdown.

Those numbers don’t even seem to do justice to the load he carried, although he did finish near 200 yards of offense including receiving yardage. Not just because it was a low-scoring game, but also because there were many times when everybody at Thalassa Stadium knew a Bohls run was coming, and his only choice was to run over several defenders every play. He was relentless to cap off one of the best 2020-21 seasons of any running back in Southern California.

“All my boys did their job,” Bohls told SBLive after the game. “My linemen did a good job blocking and everything… I just love this team to death and we just wanted to get the win.”

“For all the seniors, it meant pressure because this is our last year. There’s no ‘after that’… we were not losing this game.”

Punters and kickers rarely get the credit they deserve when they have a significant impact in victories, but nobody could miss the footprint San Clemente K/P Sean Harry had on this game. Punting the ball, he was on his game in a match where both teams had seemingly a countless number of 3-and-outs. His work included one punt of 48 yards and another late in the third quarter that planted Mission Viejo at its own 10, which directly led to Bohls’ touchdown.

But of course, it was his 26-yard field goal as the game expired that will go down as legendary for San Clemente football. Harry finished 1-for-1 in both field goal and PAT attempts.

COACH WOOD WOULD BE PROUD

Last season ended painfully for the Tritons, who had to forfeit in the CIFSS Division 2 semifinals for unknowingly playing an ineligible player. The hardship continued in the offseason as San Clemente lost beloved assistant coach Joe Wood to COVID-19. Of course, the Tritons nearly had no 2020-21 season at all, just like every other team in California, and that would’ve been an extra hard blow to a program graduating an outstanding senior class in a season where they’d otherwise contend for a Division 1 playoff birth.

“We played this season basically for Coach Wood,” said Bohls.

“We lost him earlier before the season started, and (San Clemente head coach) Coach Ortiz said, ‘Let’s go get this win for Coach Wood.’ We got on the field and we were like, we’re not getting off the field until we get a dub.”

While there are still no playoffs for anyone this season, San Clemente’s last game sealed up an undefeated regular season and South Coast League championship, culminating with a win in a particularly heated rivalry. It was an emotional win for the Tritons, and they did it for Coach Wood.

EMOTIONS ADD FUEL TO THE FIRE

Ultimately, it’s nights like this that make rivalries great, because both teams truly left it all out on the field. Many tears were shed by both the victors and losers in this game, and neither team knew which one would be them until it was all the way over. For Mission Viejo’s outstanding senior class, it’s the painful end of a great era, and for San Clemente’s seniors, it couldn’t be a more rewarding one. This year’s match was destined to be particularly emotional, as it happened to be the last game of a regular season with no postseason following it.

You can bet that the returning players on both sides will vividly remember the ups or downs of this season’s battle. And it will only fuel the drive to come out on top next season.