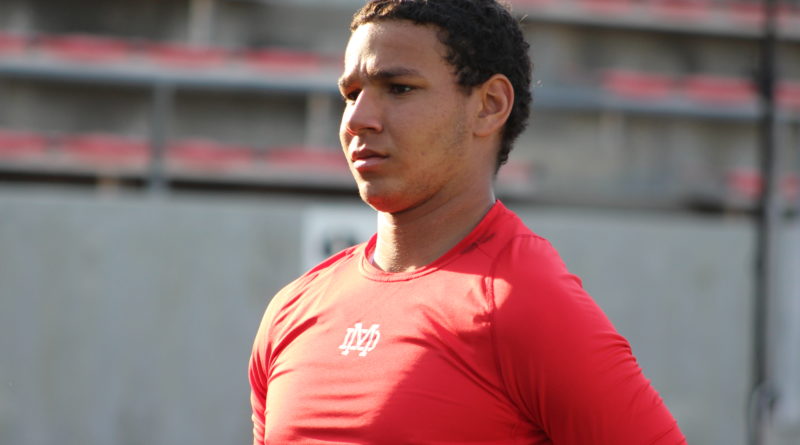 SANTA ANA — On March 3rd, two weeks before Mater Dei began its season against JSerra, Monarchs head coach Bruce Rollinson didn’t know who his quarterback was going to be this spring. There were three QBs competing for the starting job, but Rollinson was sure he wanted to settle on one.

Five victories, 15 touchdown passes, and a Trinity League championship later, Mater Dei freshman Elijah Brown not only proved Rollinson right this spring with his play, he insured that the Monarchs won’t have another quarterback competition any time soon.

Brown completed 14 of 24 passes for 210 yards and four touchdowns in Mater Dei’s 34-17 rivalry win over St. John Bosco on Saturday night. With the victory, Mater Dei will clinch the No. 1 ranking in the final SBLive California high school football rankings for the spring 2021 season.

BROWN IS A STAR IN THE MAKING

“Dude, those first two games it was kind of a learning period for him and these last three games he’s been on fire,” Williams said of Brown postgame. “That’s more than we can ask for from a freshman quarterback. That’s crazy.”

Brown hit Williams for an 18-yard touchdown in the first quarter and then St. John Bosco responded with two touchdowns of their own to go up 14-7. But in the final three quarters, the Monarchs outscored the Braves 27-3, with Brown throwing three more TDs.

“The young kid did a tremendous job tonight,” Rollinson said. “For a kid that’s only 15 years old to play like that in a game like this, I can’t say enough. And he’s going to get a lot better.”

QUINCY CRAIG MAKES THE PLAY OF THE GAME

Heading into the fourth quarter, Mater Dei led 31-17, but St. John Bosco had possession on the Mater Dei 10 yard-line. On second down and seven, St. John Bosco quarterback Katin Houser kept the ball on a read option to the right which initially fooled Mater Dei. It looked like Houser was going to score, but Mater Dei’s Quincy Craig met Houser before the goal line and forced a fumble, which the Monarchs recovered in the end zone.

“I didn’t want him to score,” Craig said. I just came in and I tried to get him and somehow I got the ball out. I was really hyped we got the ball. That was really fun.”

Let Craig’s performance on Saturday serve as a lesson for all high school football players. In 2019 as a sophomore, Craig played running back for Mater Dei splitting time with Marceese Yetts. This spring, 2022 Oklahoma commit Raleek Brown transferred to Mater Dei and he shared carries with Yetts, which pretty much forced Craig out of the backfield. Instead of transferring or pouting, Craig switched over to the defensive side of the ball, where he made the play of the game on Saturday.

BOSCO HELD TO FEWEST POINTS THIS SPRING BY FAR

Coming into Saturday’s game, the fewest point total St. John Bosco had this spring was 38, so Mater Dei holding St. John Bosco to 17 points is impressive, especially considering the Braves only mustered three points in the game’s final three quarters.

“I can’t say enough about the defense,” Rollinson said. “They bent a little, but they never broke. Other than [Jabari Bates’ 66-yard TD run] they had to earn every inch that they got.”

Mater Dei linebackers Raesjon Davis and David Bailey lined up as defensive ends for much of the night, which gave the Monarchs speed on the edge and allowed them to control the line of scrimmage for the most part. Craig caused the key fumble in the fourth quarter and Domani Jackson had a fourth quarter interception of Houser that sealed the win.