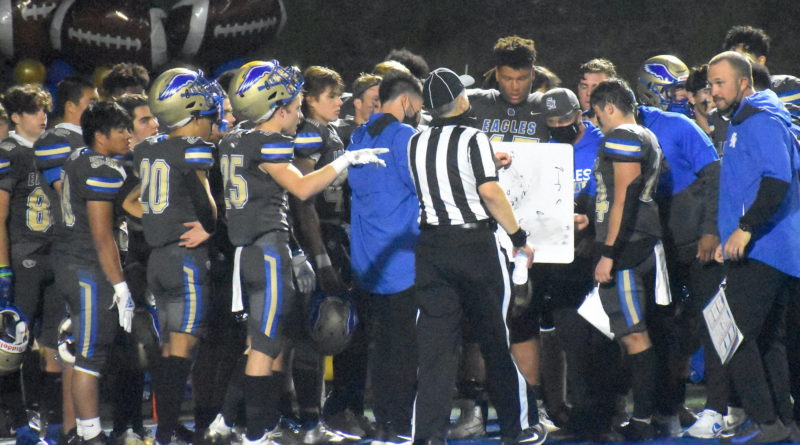 SANTA ANA– Servite’s passing game has been one of the biggest stories in Southern California high school football this season, but it was the Friars’ running game that stole the show Thursday night against Santa Margarita.

With 5-star WR Tetairoa McMillan and 4-star TE Keyan Burnett both out, all six of their touchdowns came on the ground in a 42-13 win that locked up their second straight third-place finish in the Trinity League. Here are three takeaways from the game:

SERVITE DOES IT ON THE GROUND

Missing the premier wide receiver and one of the best tight ends in California, Servite didn’t skip a beat, successfully turning to the running game for the vast majority of the game.

Kyle Bandy dominated the first quarter, carrying a heavy load in two Servite drives and capping them both with touchdown runs, one coming from 31 yards. He finished with 103 rushing yards. Fifita was very efficient throwing the ball when the Friars did opt to pass, but he was also a focal point of their rushing attack and finished with two rushing touchdowns as well. Houston Thomas and Chris Hernandez also ran for touchdowns for the Friars, who benefitted from a very strong performance by their offensive line against a dominant Santa Margarita D-line.

Also, Servite’s underrated, hard-hitting defense continued performing at the elite level it has all season. On a night where the Friars’ offense scored plenty of points but wasn’t quite at its peak, the complexion of the game might have felt a lot different if the defense weren’t outstanding. Their pass-rush made things difficult for Santa Margarita QB Colt Fulton numerous times. And the secondary was stellar as well, with Jack Kane leading the way with a momentous pick in the third quarter and Noah Avinger covering Reymello Murphy in impressive fashion.

As for SM, the Eagles scored touchdowns on a wildcat run by Ian Grogan and a pass from Fulton to Murphy.

Servite led 21-7 at halftime with the momentum in its favor. 14 points is not necessarily a commanding halftime lead, but the Friars’ defense was so strong that a comeback already didn’t seem to be in the cards.

A rushing touchdown by Fifita finished off a very fast drive only a minute and 40 seconds into the second half, and Kane’s interception with roughly eight minutes left in the third quarter put the game out of reach.

In a game where the Eagles would’ve needed their A-game to have a chance, this was not SM’s night on either side of the ball. They brought plenty of effort, but they just weren’t clicking at the level they are capable of. Still, despite trailing by a nearly insurmountable lead for most of the second half and facing a particularly physical foe, Santa Margarita didn’t stop battling. After all, the Eagles have carved out an identity the past couple seasons of showing plenty of fight and not backing down to anyone. Despite losing a game which they expected to have a shot at winning in somewhat lopsided fashion, their identity remained true on Thursday.

It seemed symbolic for the grit of this squad when 4-star DE and Cal commit Derek Wilkins returned almost immediately after a hard shot to the shoulder area, which left him grimacing for the rest of the night. He not only stayed in the game, other than a single snap, but remained very active until the end as if nothing had happened, even when the game was out of reach. Whereas a lot of the top senior recruits in California are sitting out or taking it easy this season, Wilkins was still embodying Santa Margarita’s hard-nosed identity till the very end, something he’s done regularly in the past few seasons.

On something of an off-night for SM, it didn’t get ugly, but the game was out of reach for most of the second half. Still, Santa Margarita stuck together and kept playing physical, intense football, which is tough to do against an elite opponent when you’re down by a margin.