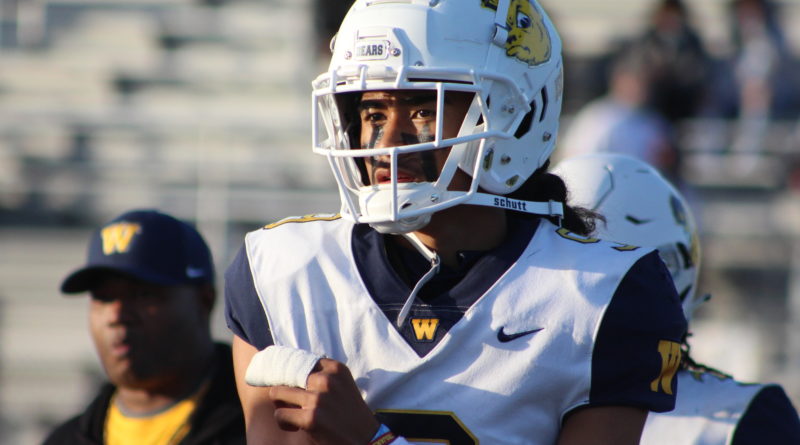 DOWNEY — In a COVID-19 shortened spring football season, the stakes couldn’t get any higher than they were on Friday night. Warren and Downey were both undefeated heading into Friday’s clash and the San Gabriel Valley League title was up for grabs, which in a year with no postseason, meant this was a championship game level showdown.

And it did not disappoint. The game was back and forth and came down to the last play when Warren freshman Jordan Jones intercepted Downey quarterback Chris Hernandez to seal a 41-38 Bears win. Warren celebrated like they’d won a Super Bowl, which Downey head coach Jack Williams didn’t appreciate (he had some choice words with Warren head coach Kevin Pearson afterwards), but that’s a rivalry.

Friday’s game was filled with trash talk and big hits. It was fun. Below are three takeaways.

Pearson knows quarterbacks. He worked with Bryce Young, Alabama’s next starter, as an underclassmen during his time at Cathedral. Following Warren’s victory, Pearson called sophomore QB Nico Iamaleava, “without a doubt the top quarterback in the nation.” He went on to say, “when you have the top kid in the country, this is what happens.”

Iamaleava threw three TD passes Friday night and had no turnovers. His best play in the game came on a fourth quarter 4th and 10 when he hung in the pocket and got creamed, but not before tossing a 25-yard touchdown to senior Asontt Williams. That made the score Downey 38 Warren 33 with 11:21 to play.

Following a Downey turnover on downs, Warren sophomore running back Marcus Higgs scored the game-winning touchdown on a three-yard run with 5:47 to play.

Warren led 26-16 at halftime, but was outscored 22-0 in the third quarter. In the fourth, the Bears rebounded with the two touchdowns, which was enough to win the San Gabriel Valley League. Downey did not score in the fourth quarter.

“We just came out flat in the third quarter,” Iamaleava said. “We got our heads too high after halftime and we had to regroup and once everyone settled down we were good.”

Game comes down to final play

Jones made two game-clinching plays for Warren on Friday. With 2:00 to go, he tipped a Hernandez pass for an incompletion resulting in a Downey turnover on downs and then intercepted a Hernandez pass in the end zone on the game’s last play to clinch the victory. Warren led 41-38 when Jones made both plays, which ended up being the final.

Funny enough, Friday’s game was the second season in a row the rivalry game ended on a Warren catch as time expired. In 2019, the Bears won on a last second 49-yard Hail Mary.

Following Jones’ interception, Warren celebrated as the teams converged at midfield and some pushing and shoving ensued.

“It’s just one of those heated things where kids are kids,” Pearson said. “Is it good? No it’s not good. It’s an emotional rivalry, but I’m not condoning it.”