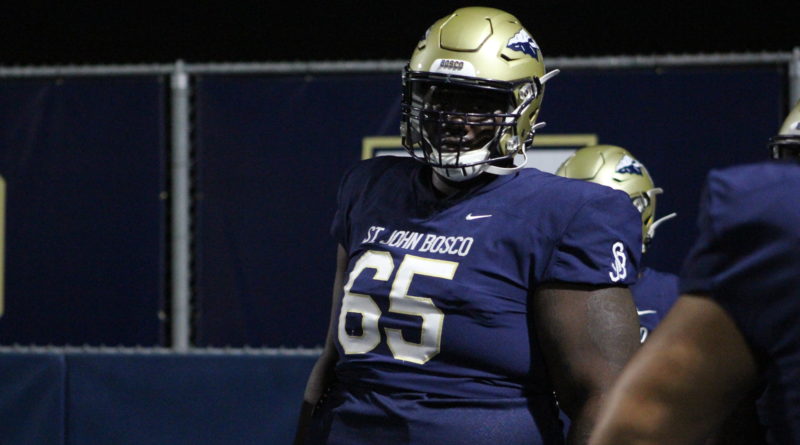 With the spring 2021 football season underway, SBLive California continues to take a look at the top high school football players in the state, position by position.

After taking an in-depth look at the best tight ends in the state, we’re now breaking down the state’s top offensive linemen.

Since this is not a recruiting ranking, players’ national rankings or college offers were not primary criteria, but were taken into account – mainly for players who haven’t received a full opportunity to shine at the varsity level yet. Performances in club football or at camps were not taken into consideration. The rankings were compiled by SBLive reporter Bodie DeSilva.

Class of 2021 offensive linemen who have decided to graduate and enroll early in college were not considered in these rankings.

Crane has helped the Eagles to a 2-2 start in 2021 while dealing with a difficult Trinity League schedule. He has signed with Navy.

Fullwood has helped the Cardinals get off to a 3-0 start in 2021. He has signed with Fresno State.

Jones stands 6-foot-9 and weighs 300 pounds. He has signed with San Diego State.

Wyrsch helped the Knights to an 11-3 record while paving the way for an offense that averaged over 25 points per game in 2019. He has signed with Washington.

Rosas has contributed on both sides of the ball for Dons. He chose UNLV over a group of schools that included Auburn, Arizona State, and Miami.

Maseuli is a massive interior line prospect (6-4, 350). He signed with San Diego State over offers from schools in Power Five conferences.

Swanson has a big frame at 6-foot-6 and 300 pounds. He’s already added offers from 15 schools.

Randolph has helped the Mustangs start 5-0 during the spring season. He has signed with Boise State.

White signed with Oregon State in February after picking up offers from several west coast schools.

Spencer has played several spots on the line for the Huskies during his career. He’s committed to the University of Pennsylvania.

Madrigal has played a key role in the Cougars 4-0 start to the spring season. He has signed with Nevada.

Martinez was so dominant during his junior season that he was named the Grossmont – Hills League Offensive Player of the Year as he helped lead the Highlanders to the Open Division Championship. He has signed with Southwest Minnesota State.

Miki-Han has been a key piece for the Monarchs the past couple of seasons. He’s headed to Colorado State.

Migao signed with BYU over offers from 10 other schools.

The Diamondbacks went 12-1 and scored 67 touchdowns in 2019 with DiGiorgio blocking up front. He has signed with UCLA.

Pulealii helped the Chieftains average nine yards per carry and score over 35 points per game in 2019. He has signed with UCLA.

The 6-foot-5, 290-pounder chose the Trojans over offers from six other Pac-12 schools.

Greene played a big role in helping the Braves capture the national championship in 2019. He’s helped lead them to a 5-0 start in the 2021 spring season and is one of the most sought after junior recruits in the country.