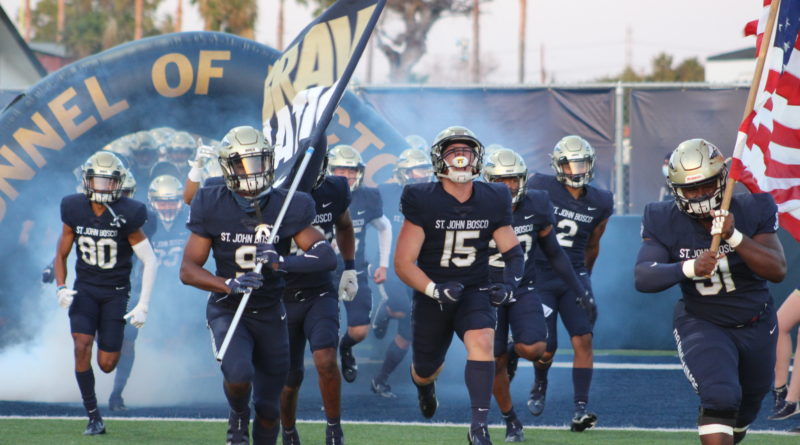 It’s the last week of high school football for most of Southern California, and the slate of games in Week 6 is the best of the season — headlined by. No. 1 St. John Bosco vs. No. 2 Mater Dei.

Here are the Top 10 Southern California high school football games to watch in Week 6 of the 2021 spring season (April 15-17).

Now that both teams have dropped close ones against Vista Murrieta, this is officially the second-place match in the turbulent Southwestern League. Chaparral upset the Nighthawks in a 30-27 thriller last season, and this time it looks to be a tossup from the start between two of the Inland Empire’s better teams.

A usual Foothill League heavyweight, Valencia, versus the upstart Saugus for a league championship. Both of these teams put up big offensive numbers in wins over Canyon (Canyon Country), West Ranch, and Hart, and won very low-scoring defensive battles over Golden Valley. Valencia has an edge in overall margin, but first place could come down to the wire on Friday. It should be a quarterback between two underrated, nationally-ranked pro-style slingers having huge seasons, Saugus senior Colton Fitzgerald and Valencia sophomore Tyler Voss.

In another clear-cut gold medal match, this could be the season Sunny Hills steps out from La Habra’s shadow over the Freeway League. The Highlanders have had an excellent campaign in what looked to be a potential rebuilding season behind the emergence of sophomores Justin Gil at QB and Jacob Apodaca at WR, with one bona fide stud at SB/WR in Brandon Vasquez. La Habra turned heads with a 36-15 win over Chaminade to start the season, but proved to be touchable the next week as Fullerton very nearly knocked them off in overtime.

Reigning CIFSS Division 8 champion and underrated league contender Sunny Hills beat Fullerton 31-7 last week, and has actually swept the Freeway League circuit in more dominant fashion than La Habra so far. The Lancers run the ball almost every time through Vince Silva, David Harris, and Brandon Roberts, totaling 1,911 yards and 32 touchdowns through just five games on an amazing team average of 11 yards per carry. La Habra has the highest-rated recruit in this game with 3-star LB TJ Patu, but Sunny Hills has a standout LB tandem in its own right with Princeton commit Carson Irons and breakout senior Kevin Hu.

If La Habra gets off to a fast start offensively, it might be hard for Sunny Hills to match up in a comeback situation without much of a passing game. Otherwise, this could emerge as the most exciting game of the week.

Carlsbad already went on a particularly impressive run to sweep the Avocado League, and Granite Hills did the same in the Grossmont Hills League. So, who wouldn’t want to watch two of the best teams in the San Diego Section this season go at it in their season finales with nothing but pride and bragging rights on the line? Carlsbad has the edge here after outscoring their league gauntlet by a whopping 171-20, but don’t count out dual-threat QB Justus McComb and an Eagles squad that’s been one of the area’s best stories this season.

Sierra Canyon once again comes in the massive favorite, but the one-game Gold Coast League playoff between these two rivals is always a spectacle. Paraclete was the heavy underdog last season, but the Spirits very nearly knocked off the eventual CIFSS Division 2 champion and CIF 1-AA state finalist in a 24-20 nail-biter. While the gap is even wider on paper this season, Paraclete is still a very good team that might give the Trailblazers a run for their money.

This game will determine official status as third in the Trinity League for the season, but the better storyline for those who know these teams might just be that two of the best teams in the section come in hungry for a statement win.

Servite was able to seriously push both St. John Bosco and Mater Dei in the hunt for T-League supremacy, but the Friars didn’t pull out a W in either game. And in a season with almost no non-league slate and no playoffs, that leaves a consensus top-five team in California with only three wins on the season heading into the finale.

But Santa Margarita is in a very similar boat. The Eagles have been a powerhouse this season, and they’d have several big wins to show for how good they are this year in any other season. But because their highly-anticipated matchup with Orange Lutheran was canceled two weeks ago, they’ll need to pull off a significant upset on Thursday to finish with more than just two wins.

Coming into the season, it looked like the San Diego Section game of the year might have been one of these CIFSDS powerhouses facing Cathedral Catholic earlier in league play with first place on the line. Instead, Cathedral has already locked up a Western League title, but this matchup between arguably second and third best teams in San Diego has a silver medal on the line, and should be evenly matched.

After Alemany dropped last week’s match against Chaminade, this showdown is no longer necessarily the clear-cut Mission League gold medal match. The Cavaliers are still unbeaten in league, and even if they lose this game, they’d still finish at least tied atop the standings at 4-1. But they can officially seal the deal with a win this week. Additionally, Chaminade plays Cathedral this week, and will almost certainly win and move to 4-1 in league as well, so if Alemany loses this game, the Warriors very likely drop out of the top two.

As usual, this season’s MV vs. SC battle constitutes the South Coast League championship and one of the biggest rivalry games in all of SoCal high school football. Mission Viejo is again the favorite – fairly heavily, although the gap isn’t as large as it was heading into last season’s match when the Diablos won 38-6. There are too many high-profile position matchups and battles to dive into, but the running back duel features two of the section’s premier rushing threats, with San Clemente 3-star Arizona commit James Bohls and Mission Viejo 2-star Northern Colorado commit Jacquez Robertson.

Both of these teams play a physical, hard-hitting brand of ball, and it’s no secret that they don’t like each other. No matter how the score turns out, this is bound to be an intense battle.

Here we go again. Arguably the two best teams and most well-known programs anywhere in high school football going at it with the season on the line. With no playoffs this season, these two teams won’t meet for a second time in the Southern Section championship game for a change. However, that makes a Trinity League title perhaps even more valuable than usual this season. Either way, the stakes are already high enough every time these rivals square off with football fans across the country tuning in.