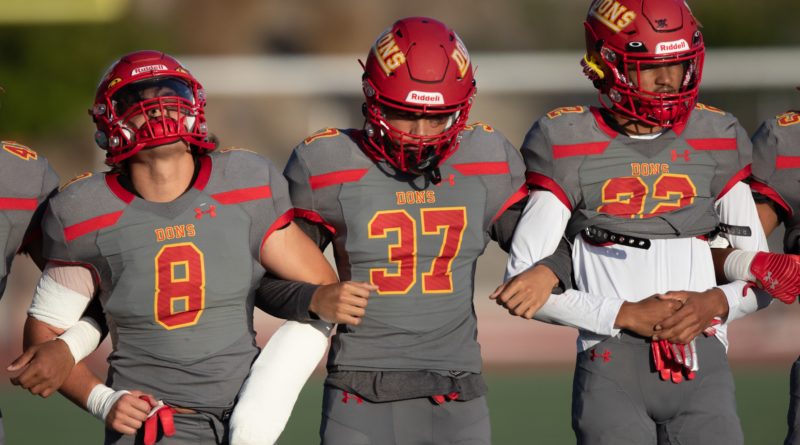 Cathedral Catholic continued their dominant form in week four, shutting out Lincoln with strong play in all three phases of the game to cement their spot as the top football team in the San Diego Section.

The final week of the regular season features two ranked matchups: second-ranked Carlsbad was able to fill their open date with a trip South to take on fourth-ranked Granite Hills; and Otay Ranch will visit Eastlake with a battle for the league title at stake.

The Dons rolled over Lincoln, 41-0, recording their third shutout in four games. They’ll travel to Madison to finish up the spring season this week.

The Lancers beat La Costa Canyon, 56-7, and have now outscored their opponents by 149 points in four games. They’ll take on undefeated and fourth-ranked Granite Hills for the first time since 2011 to finish up the season.

Mission Hills has been very consistent in all four games so far, scoring between 28 and 38 points in each of them. They’ll finish up against San Marcos this week in the annual Discovery Bowl and look to be one of San Diego’s top teams come the 2021 fall season.

Granite Hills got a strong offensive performance against Helix on Friday, scoring 35 points or more for the fourth time this season. They’ll conclude the season against Carlsbad in a rare non-league battle.

The Saints were off for a second straight week after COVID-19 protocols ended Oceanside’s season two weeks early. They’ll finish up at Lincoln this week.

Lincoln struggled on both sides of the ball against Cathedral, much like each opponent of the Dons has done this season. They’ll battle St. Augustine this week for second place in the Western League.

The Vikings continue to cruise through the Eastern League and have now scored 200 points in four games while only allowing 36. They’ll host San Diego to finish the year.

The Titans pulled out a one-point victory over Mater Dei Catholic last week for their third win of the season. Jordan Blondin and Trey White are two of San Diego’s best juniors.

Poway moved to 4-0 after handling Vista, 38-7. They’ve beaten their four opponents by an average of 27 points per game. The Titans will host rival Rancho Bernardo to end the season.

The Mustangs have been one of San Diego’s best surprises during the spring season. They’ll battle eighth-ranked Eastlake for the Metro-Mesa League title this week.