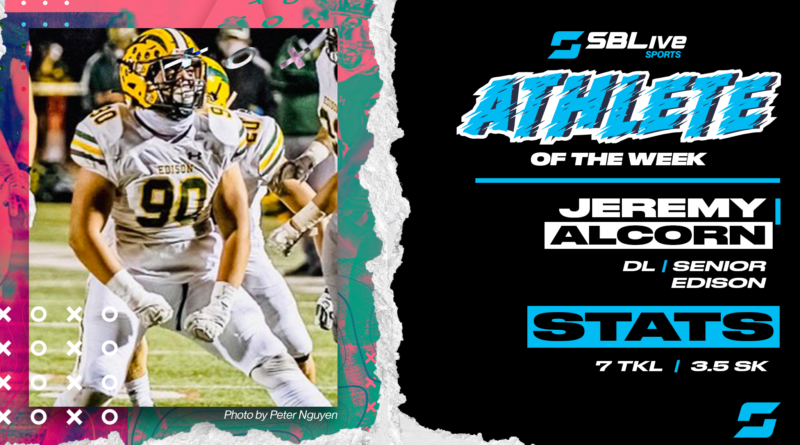 The senior had seven tackles and 3.5 sacks in the Chargers’ 40-0 win over Fountain Valley.

Alcorn received 62.14% of the vote, beating out Mission Viejo QB Kadin Semonza who finished second with 34.49%. Serra (Gardena) QB finished third with 2.22% and Los Alamitos QB Malachi Nelson finished fourth with 0.89%. There were over 17,000 votes tallied this week!

DJ Watts, Murrieta Valley RB: Watts had a huge night against Murrieta Mesa, rushing for 270 yards and four touchdowns in the 63-35 win.

Victor Hilario, Coachella Valley RB: Hilario averaged over 12 yards per carry on Friday, finishing with 185 yards and three touchdowns in the win over Banning.

Hunter Roddy, Chaparral RB: Roddy had 150 rushing yards and four touchdowns in the 32-point win against Temecula Valley on Friday.

Vance Jefferson, Poway WR: Jefferson caught two touchdowns and returned a kickoff for a touchdown all in the first half of Poway’s 54-17 win over Del Norte on Saturday.

Jackson Stratton, La Jolla QB: Stratton threw six touchdown passes against Mission Bay on Friday, giving his 15 this season in only three games. He also ran in his second touchdown of the season in the 63-3 win.

Justin Brown, Grossmont QB: Brown had a huge game against Helix on Friday, passing for 482 yards and four touchdowns in the 49-35 loss. He also ran for 21 yards and a touchdown.

Nathan Acevedo, Grossmont WR: Acevedo and Brown were in rhythm on Friday, with Acevedo catching eight passes for 250 yards and three touchdowns against Helix.

Omar Perez, Chula Vista QB: Perez tossed four touchdown passes and rushed for another in the win over Hilltop.