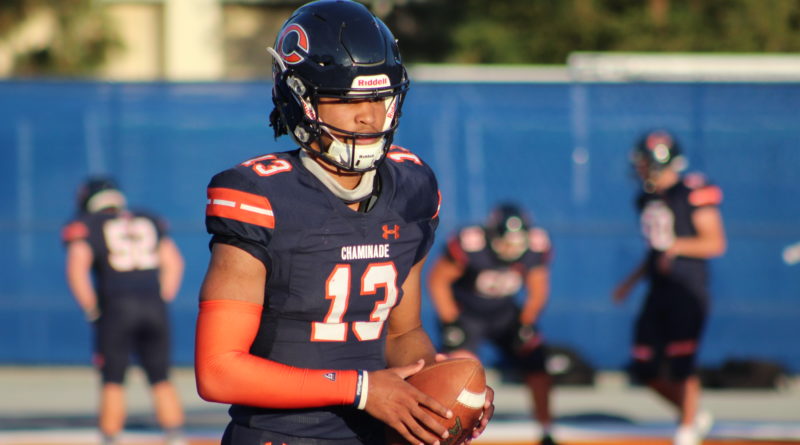 WEST HILLS — A month ago Jaylen Henderson opted out of the spring high school football season. On Saturday night he threw four touchdowns to lead his Chaminade team to a surprise 34-27 upset of previously undefeated Alemany.

“I felt like we had unfinished business this year,” Henderson said.

The senior QB signed with Fresno State in December and initially decided to mentor Chaminade’s young QBs and help coach the Eagles this spring to guarantee he’d arrive at Fresno State injury free. He missed Chaminade’s first game of the season, a 35-16 loss to La Habra, but then changed his mind and has played in the Eagles last four games. Chaminade has gone 3-1 in those games and gotten better every week.

“Football doesn’t last forever,” Henderson said. “I just wanted to get these last five games in and enjoy these moments with my teammates.”

Below are three takeaways from Chaminade’s win.

HENDERSON SHOWS OFF HIS LEGS

Henderson threw four touchdowns, which was obviously significant, but he ran for 123 yards and a TD as well. Every time he dropped back, Alemany’s defense wasn’t sure what was coming.

What was so surprising was that running the ball with Henderson wasn’t a major part of Chaminade’s game plan heading into the week.

“Half the time he ain’t supposed to run, he just does it any way,” Chaminade head coach Ed Croson said with a chuckle postgame. “For some guys it’s one, two, three, throw it away. For Jaylen it’s run.”

Henderson’s ability to make big plays on broken plays was the difference in the game. With 3:28 remaining in the first half, he rushed for a 26-yard TD after dropping back to pass. That made the score Chaminade 20 Alemany 0.

“I’m pass first, but I can use my legs,” Henderson said. “If they give me something, I’m going to take it.”

On paper, Alemany has a better roster than Chaminade but it didn’t look that way on Saturday. Two late touchdowns from Alemany meant the game came down to the final seconds, but realistically Chaminade was in control for most of the night. Chaminade led 34-13 with 11 minutes to play in the fourth quarter.

Adding Henderson has been the key cause for Chaminade winning three straight after starting the year 0-2, but there are other factors as well, according to Croson.

“Our defense has come together, they’ve been playing better each week,” he said.

On Alemany’s first drive of the game Chaminade forced a turnover on downs after the Warriors couldn’t score on fourth and goal from the one, which in a one score game was a huge play even though it was so early.

“Our offensive line is getting better too,” Croson said.

MISSION LEAGUE TITLE UP FOR GRABS

With one week of the season left, Serra is currently 4-0 and in first place in the Mission League. Alemany is 3-1 and plays Serra next week. If Alemany beats Serra and Chaminade, who is also 3-1, beats Cathedral, then the Mission League title will be shared. If Serra beats Alemany, then they will win outright.