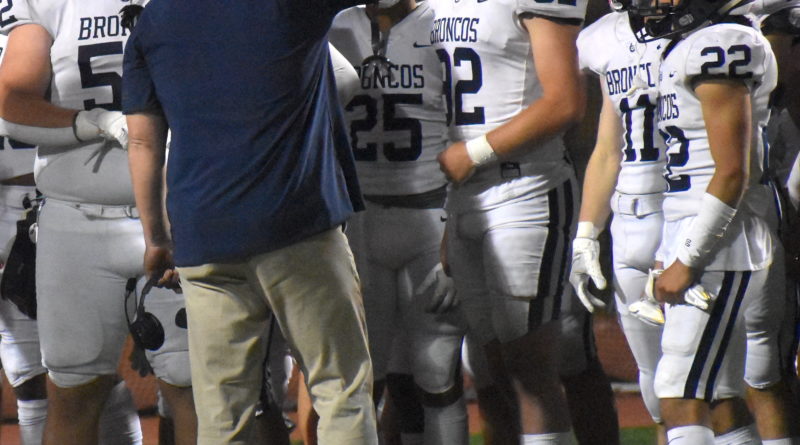 MURRIETA– Vista Murrieta locked up a first-place finish in the Southwestern League on Friday night, winning a 51-41 shootout against Murrieta Valley. Broncos RB Gavin Galzote was the star of the night, running for 289 yards and two touchdowns in the victory. Here are three takeaways from the game.

Both offenses were nearly unstoppable in this game, and they function entirely differently. Vista Murrieta runs the ball more often than not and has one of the best run-blocking schemes in the Southern Section behind an athletic O-line. The Broncos ran for 440 yards in this one and had multiple running backs getting major work in, with Galzote’s 289 yards leading the way. Matthew Caldera was also a major factor in the win with 136 yards and two touchdowns on over 10 yards per carry, and Jelani Jefferson also ran for two touchdowns as well.

When Vista Murrieta did opt to pass, Brady Jones got the job done. He threw for 183 yards and a touchdown with no turnovers on 11-18 completion. Sean McDermott was his leading receiver with 99 yards, and Ezekial Vestal had a touchdown catch.

Murrieta Valley, on the other hand, has one of the best QB/WR combos in the state with 3-star recruits Brandon Rose and Tiger Bachmeier, and the Nighthawks play through Rose heavily. He completed 23 of 34 passes for 301 yards and two touchdowns, with Bachmeier catching for both touchdowns and more than half of the yardage. While it’s the passing game that’s featured in the offense, Murrieta Valley also has an underrated running game through Rose and RB DJ Watts. Rose also ran for two touchdowns on Friday, Watts ran for 124 yards and a touchdown, and Dean Connors had a rushing touchdown.

Numerous times, the Blackhawks sniffed out incoming Vista Murrieta handoffs, and seemed to have Galzote trapped for a minimal gain or loss. But time and time again, Galzote would stay on his feet despite multiple hits from the opposing front seven, and either drag larger defenders a few more yards or run to the outside and turn it into a footrace. It was an impressive display of power running and stamina for a tailback of the light and nimble variety.

While Vista Murrieta’s defense never entirely solved the Blackhawks offense, the Broncos’ rushing attack proved too dominant, and also bought a lot of time for their defense to rest and regroup.

Vista Murrieta jumped out to a 10-0 lead early in the first quarter, and after that, it was clear that the game would come down to whoever could put together multiple defensive stops. Both offenses kept on rolling through all four quarters, so that 10-point edge from early on ended up being the difference, and the Broncos led the entire way.

The pivotal moment came with just over three minutes left in the game. Murrieta Valley’s defense had put together one of its best sequences of the night, and forced a third and 13. The Broncos turned to the passing game, and Jones found a wide open Grant Wayne near the sideline for a first down. With a first down and good field position, Vista Murrieta had one more series of strong runs left in the tank, and Galzote’s second touchdown made it 51-41 with 1:44 left in the game.

At that point, it would’ve taken a miracle for Murrieta Valley to execute a fast touchdown drive and recover an onside kick. Vista Murrieta officially sealed the game a few plays into the Nighthawks’ last drive when Keona Armstrong intercepted a desperation pass from Rose with under a minute to play.

MURRIETA VALLEY’S BEST DAYS ARE AHEAD

For the second straight season, the Nighthawks have been in league contention with numerous underclassmen in key roles. While Murrieta Valley will lose a handful of instrumental contributors on both ends after this season, it will return a significant chunk of its core on both ends, including Rose and Bachmeier, and three of its four leading tacklers.

Heading into the fall season, there’s a strong chance that the Southwestern League race will come down to these rivals again. And there’s an argument to be made that Murrieta Valley will be the favorite come next season, with the potential to build on the last two seasons’ successes and take another leap.