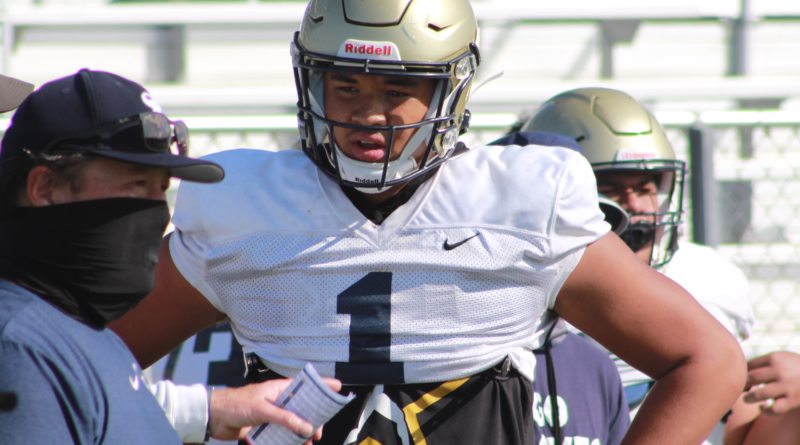 With the spring 2021 football season underway, SBLive California continues to take a look at the top high school football players in the state, position by position.

After taking an in-depth look at the best wide receivers in the state, we’re now breaking down the state’s top tight ends.

Class of 2021 tight ends who have decided to graduate and enroll early in college were not considered in these rankings.

Brennan has played a lot of defensive end this spring (like a lot of players on this list). With star 2023 quarterback Malachi Nelson under center at Los Alamitos, expect Brennan to get more involved in the passing game this fall and in 2022. Brennan is a three-star recruit.

Polaski has made 16 catches for 154 yards and four TDs this spring.

Friedman has caught 23 passes for 199 yards and one TD this spring for Oak Park.

Awaida has been banged up this spring, but he was a key part of the Braves’ state championship run in 2019. He caught a touchdown pass in the Southern Section championship game against Mater Dei and in the state title game against De La Salle.

“Adam had three really great games for us to end the season,” St. John Bosco head coach Jason Negro told SBLive in February. “He can be an end line tight end and also a guy that can play in space. That’s a big advantage for us.”

Vanisi has received scholarship offers from Arizona State, Arizona and Kansas, per his Twitter page.

Uphold is a University of Wyoming signee. In addition to tight end, he also plays defensive end for Garces Memorial.

Standing at 6-foot-5 and weighing 240 pounds, Hoffman has great size. So far this spring, he’s made 13 catches for 238 yards and two TDs.

Giulano will play at Harvard in the fall. He’s made five catches for 98 yards and a TD this spring.

Flanagan is emerging as a national recruit in the 2023 recruiting class and he will rise quickly up the rankings the more varsity time he gets for De La Salle. Flanagan has received scholarship offers from Michigan, Washington and Cal, per his Twitter page.

Milbourn is an unsigned senior and he’s playing with a chip on his shoulder. This spring, he leads California tight ends with 408 receiving yards. He’s also caught six touchdowns.

Grayson is signed to UNLV. He’s made six catches for 112 yards and one TD so far this season.

Redden is signed to BYU and he plays on both sides of the ball for San Clemente. He caught eight passes and one TD in 2019 for the Tritons.

Jernegan will play at Valparaiso next season. This spring, he’s caught 20 passes for 268 yards and two TDs. In 2019, he caught three TDs.

Pedersen is signed to Louisville.

Burnett is committed to USC. He hasn’t been able to play much this spring due to an injury, but in 2019 at JSerra, Burnett made 22 catches for 314 yards and two TDs.

Uiagalelei is the younger brother of Clemson quarterback DJ Uiagalelei and he’s one of the country’s most intriguing college football prospects. Matayo starts on both sides of the ball for St. John Bosco and has been a difference maker on offense and defense in each games he’s played in in 2021. His break out game at tight end came in a 38-28 win over Servite where he caught two touchdowns.

“He’s dangerous,” St. John Bosco head coach Jason Negro told SBLive after the game. “He’s one of the most talented kids in the country.”

Lyons is emerging as a national recruit in the class of 2023. He’s received scholarship offers from Arizona State, Oregon and Washington, among others, according to 247Sports.com. So far this spring, Lyons has caught 13 passes for 237 yards and three TDs.

Endries has received scholarship offers from Army, Colorado State and Fresno State, per 247Sports.com. So far this spring, he’s made 18 catches for 268 yards and three TDs.

Murphy is signed to San Diego State. In 2019 he made 22 catches for 476 yards and eight touchdowns. The eight TDs led all California underclassmen tight ends. This spring, Murphy has caught 10 passes for 195 yards and one score.

Byrne led all underclassmen tight ends with 636 receiving yards in 2019. He also caught five TDs to help Carmel to a 6-6 season. Byrne is signed to Oregon State.